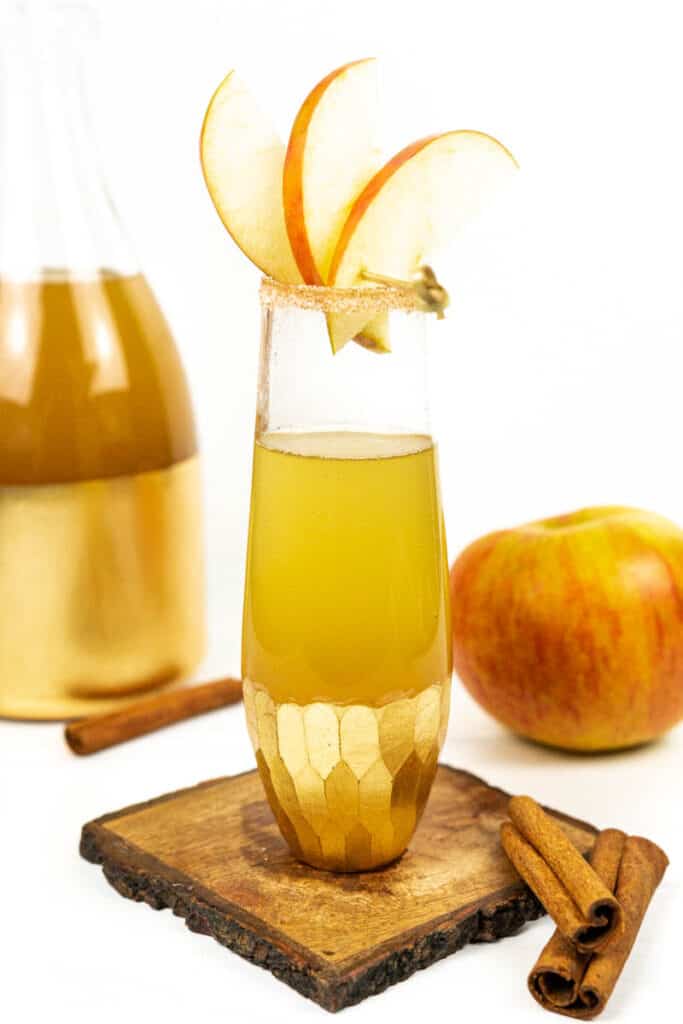 Pour a round of apple cider mimosas! These sparkling, bubbly cocktails feature spiced apple cider and a cinnamon sugar rim for the ultimate fall brunch drink. Serve it at Thanksgiving or Friendsgiving, or any other fall celebration!

When it comes to fall drinks, are you Team Apple or Team Pumpkin?

Sometimes I just can’t decide. While I love a pumpkin spice latte, I also really love a warm mug of hot apple cider.

Like pumpkin spice syrup, apple cider has its own place in the fall cocktail lineup.

But I also love easy cocktails that only have a few ingredients. It’s always good to have a few two-ingredient and three-ingredient cocktail recipes in your back pocket.

The recipe for a mimosa with apple cider is easy peasy.

Take a champagne flute (stemless or with stem — it can even be a wine glass!) and fill it with 2 ounces of apple cider.

Then top it with your favorite sparkling wine! Champagne, prosecco, cava — there’s not really a wrong answer here.

Serve this sparkling apple cider mimosa recipe for all kinds of occasions, like Thanksgiving dinner, Christmas morning, any kind of holiday brunch or holiday party… Or any day of the week alongside a big stack of apple pancakes for breakfast!

What is a mimosa?

They get their name from the mimosa flower, which is a pretty orange color.

Mimosas are sometimes made with an extra ingredient — triple sec or a top-shelf orange liqueur, like Grand Marnier or Cointreau.

Vodka, whiskey or rum can also be used. (The Seelbach is a favorite champagne cocktail that’s made with bourbon, though it’s not a mimosa.)

You can mix up the OJ part of mimosas with other fruits, as I did with these strawberry mimosas and guava mimosas.

Traditionally served at breakfast or brunch, mimosas are bubbly, zesty and fun. This Thanksgiving apple cider mimosa is simply a twist on the classic mimosa.

Some people don’t like mimosas, but big deal! Just serve them champagne. They’ll be just fine.

This recipe calls for just two ingredients, so they need to be the best ones you can afford to make it the best apple cider mimosa cocktail recipe.

Technically, there are three more ingredients you can add if you want to get fancy with your Thanksgiving mimosas, but they’re totally optional.

Apple cider: Use any store-bought apple cider or feel free to make your own homemade apple cider. In a pinch, you can make an apple juice mimosa.

Champagne: Pick any kind of sparkling wine — champagne, cava or prosecco will all work. Since apple juice is sweet, it would be best to choose a sparkling wine that’s dry. Look for “brut” on the label. Look at my guide to sparkling wine to help you pick out a bottle.

Triple sec: You can add 1 ounce of Grand Marnier, Cointreau or triple sec for a little bit orange flavor. Spiced rum, applejack or bourbon would also be acceptable with apple cider! But if you want to keep things simple, feel free to skip this step.

Cinnamon sugar rim: Totally optional, but I recommend not skipping this step! A cinnamon sugar rim adds some extra fall flavor, texture and sweetness to your drink. Plus it’s just so pretty!

Dip the rim of the glass in maple syrup or honey, and let any excess drip off. (Spread it around with your finger if needed!) Then roll the edge of the glass in homemade cinnamon sugar.

Apple slices: Cut a few thin apple slices and fan them out on a bamboo cocktail skewer. Once nestled into the champagne flute, fan them out so the glass supports them and keeps them from falling over. So pretty!

There are a few ways you can update this apple cider and champagne mimosa recipe for your holiday gatherings.

Instead of 2 ounces of apple cider, substitute half of it with these ideas:

Or you can make a spiced apple cider mimosa with spiced rum. I love keeping a jar of it on my bar cart all year long.

Bourbon fans can make an apple cider bourbon mimosa recipe with their favorite whiskey instead of triple sec. Check out my bourbon 101 guide for tips on choosing your favorite bottle.

To make a non-alcoholic apple cider mimosa, use sparkling apple cider instead of champagne.

If you need apple cider mimosas for a crowd, they will love this cocktail. Serves 12.

If you love this mimosa with apple cider, then you will love more of these champagne cocktails that are perfect for the holiday season.

You won’t want to miss out on this poinsettia champagne cocktail, a gorgeous cranberry cocktail for the holiday season.

For New Year’s Eve, my elderflower champagne cocktail is never a disappointment.

Lastly, try setting up a champagne cocktail bar or mimosa bar at your party.

I’d love to hear if you try this apple cider mimosa recipe for your holiday gatherings this year! Leave a comment or review below. Cheers!