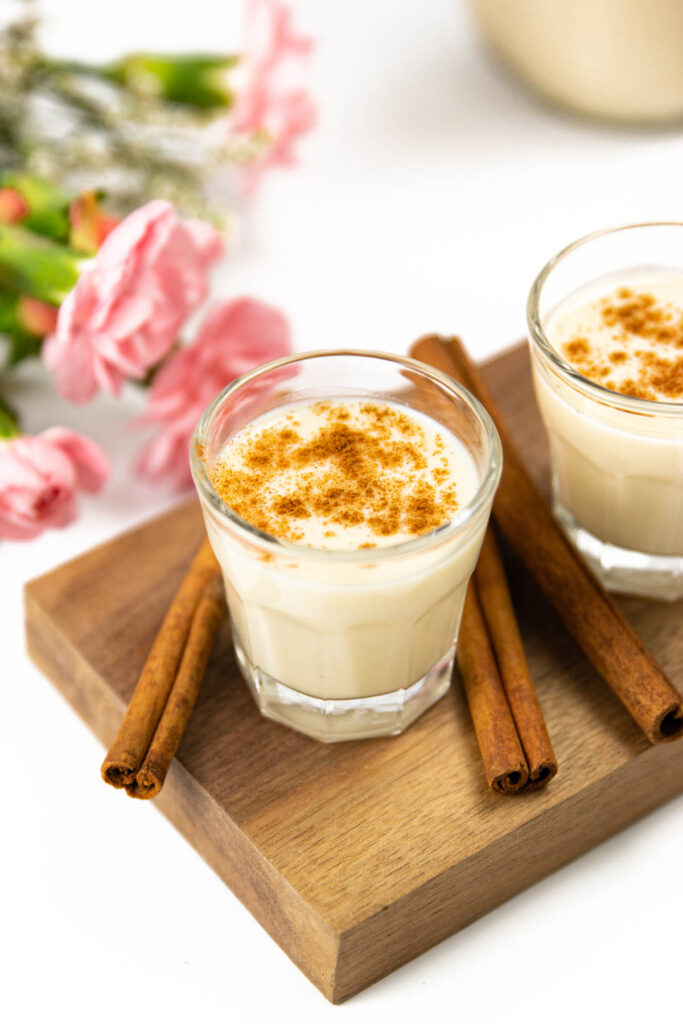 Inspired by the famous South African custard pie, melktert, this homemade version of Milk Tart Liqueur is delicious on its own. Or you can serve it as melktertjies, which are shooters with a sprinkle of cinnamon, or mix it into cocktails, coffee and desserts.

Yesterday was National Milk Tart Day in my other home country of South Africa. This may not mean much to my American readers, but to me, it’s a day worth celebrating.

Milkterts — if you know, you know.

What is a milk tart?

Milk tart, or milktert in Afrikaans, is a sweet custard tart from South Africa. It is a delicate treat with a flaky crust and topped with a generous dusting of cinnamon.

A pie of Cape Dutch origin, melktert literally translates to “milk tart.” It’s similar to a custard tart, but with a different, more delicate consistency.

I shared my mother’s recipe for her popular South African milk tart on the blog in 2014, and it is one of my most popular recipes. And with good reason — she’s a South Africa native who attended culinary school in Cape Town. You can trust her recipe! I’ve loved it my whole life.

Milktert is most often served at tea time or for dessert. My husband and I even had mini milk tart cups at our wedding!

It’s one of my favorite South African desserts, right along with pannekoek and koeksisters. It is the perfect entertaining pie when you are having friends over.

I recently learned that there is a milk tart-flavored liquor available in South Africa, and I had to try it.

This milktert liqueur is a sweet spirit with all the flavor of the classic South African dessert. Its sweet milk flavors shine under a hint of cinnamon.

Made with only vodka, sweetened condensed milk and evaporated milk, this is an easy homemade liqueur that you can make.

Here’s how you can enjoy this alcoholic version of the famous South African pie :

Or use milktert liqueur in lieu of Irish cream liqueur or Amarula liqueur, such as in a South African twist on classic Irish coffee.

This recipe for milk tart liqueur only has a few ingredients. All it’s missing is that buttery crust! Feel free to double the recipe and store it in a pitcher or other large container.

Truly, it’s incredibly easy to make. (Easier, even, than making one of those easy tarts.)

This is very handy for me, since brands like Tant Sannie se Milktert, The Liquid Bakery & Co. and Kandi Milk Tart Cream Liqueur aren’t available in the U.S. (that I know of). Home recipes make it easier to enjoy treats like milktert liqueur without the 19-hour flight!

You will mix vodka into this recipe as the alcoholic component. Vodka makes a great base for many homemade liqueurs, such as coffee liqueur, because it acts as a blank slate.

Cheaper vodka will give off more of a bitter alcohol flavor, so use the best-quality vodka you can afford, as I always say. In my Vodka 101 post, you can check out my favorite brands to keep on hand.

If you have access, you can also check out these South African vodkas to mix with. Try vodkas by Distinkt, New Harbour Distillery, Au Gold, Durbanville Distillery, Vusa or Vachellia. (I’ve not tried any of these, but I hope to on a future visit! Let me know in the comments if you have a favorite.)

Alternatively, you can mix it with cinnamon schnapps (like Goldschläger) or cinnamon whiskey (such as Fireball) to give your milktert shooters a stronger cinnamon flavor. Brandy and rum are also acceptable alternatives to vodka.

I think this recipe is the perfect ratio, but you can up the amount of vodka (or other alcohol) if need be.

You’ll need evaporated milk, which is a canned, shelf-stable, cow’s milk you can find in the baking aisle. In some countries, it is known as “unsweetened condensed milk.” To make evaporated milk, about 60% of the water in fresh milk is removed.

However, you can make milktert liqueur without evaporated milk. Just use real milk in this recipe, but keep in mind it will only last as long as your milk.

This recipe also calls for sweetened condensed milk, which provides a thicker texture as well as a sweetened taste.

Sweetened condensed milk is canned dairy milk. It is similar to evaporated milk in the way that water is removed. However, sugar is added to make it much sweeter.

Milktert is famous for its ground cinnamon topping, so you can’t forget that if you’re enjoying it as shooters or cocktails.

Whenever I can, I try to use high-quality spices that are single-origin and ethically sourced. That’s why I love this ground Royal cinnamon from iGourmet.

Spices do go bad and lose flavor over time, so it’s a good idea to replenish your stock from time to time.

How to make milktert liqueur

Making your own milk tart vodka is super simple.

How to drink milk tart liqueur

There are so many ways you can use this South African treat in cocktails and desserts. In South Africa, it is summer during Christmastime, so this simple dessert drink will be the perfect recipe for those hot summer evenings.

Drink it on the rocks. Rim your glass with cinnamon sugar and pour it over ice.

Serve it as shooters. Pour it into shot glasses (or small glasses) and top with a pinch of ground cinnamon to enjoy “Melktertjies,” AKA milktert shooters. This is the most South African shooter recipe I can think of!

Use it as a coffee creamer. I keep mine in the fridge and use it in my coffee on the weekends or after dinner.

Make a boozy milk tart milkshake. Add 2 ounces to a blender with a few scoops of vanilla ice cream to make a milktert milkshake. Don’t forget to top with a sprinkle of cinnamon!

Pour it over ice cream. There’s nothing like a boozy drizzle of liqueur on top of cold ice cream!

Mix it into hot chocolate. I love this easy hot chocolate recipe as it lends itself well to boozy mix-ins! (And it serves a crowd, too.)

There are a number of ways you can make this recipe your own.

Make it non-dairy and vegan. You can make non-dairy sweetened condensed milk with canned coconut milk. Then use your favorite plant-based milk instead of evaporated milk.

Make it fancy. Add a cinnamon sugar rim to the edge of your drink.

Try making Cape Velvet Cream Liqueur, a brandy-based homemade liqueur that’s very similar to this delightful milktart liqueur. This one has a coffee undertone and is often served with chocolate shavings on top.

Try my Amarula Brandy Alexander made with their premier liqueur made from the Marula fruit. While Cape Velvet Cream liqueur is harder to locate, you can find Amarula in most liquor stores in the USA! You could also substitute Cape Velvet Cream or Milktert Liqueur in that recipe for another South African twist.

The Don Pedro is made with vanilla ice cream, double cream and whiskey. It’s an amazing dessert cocktail!

Rooibos Tea Punch looks like something I could enjoy every day of the year — so refreshing!

Regular milk or non-dairy milk can be substituted for evaporated milk. For a non-dairy/vegan option, you can use this vegan sweetened condensed milk substitute.

Previous Whiskey 101: Everything You Need to Know