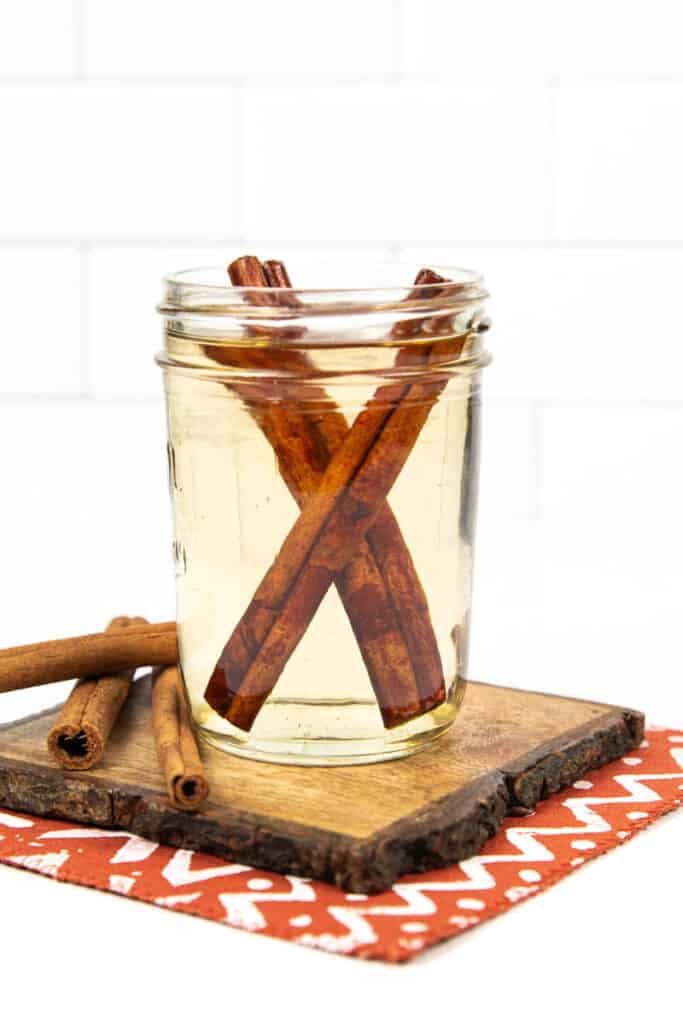 Cinnamon simple syrup is an autumnal sweetener for cocktails and coffee drinks. Sweet and spiced, this easy recipe is key to so many fall drink recipes.

Sugar, spice and everything nice, that’s what cinnamon simple syrup is made of.

And what better way to start and end the day with something so sweet and lovely?

That’s where cinnamon simple syrup comes in. I love to stir it into my morning coffee for a sweetly spiced start to the day, then mix it into a nightcap before bed.

If you’re a cinnamon lover, then knowing how to make cinnamon syrup will be game-changing in so many cocktails.

What is simple syrup?

Simple syrup is the easiest way to sweeten drinks. If you’ve ever struggled to stir pure sugar into a cold drink, then you’ll know how frustrating it is to get it to dissolve.

Simple syrup takes away that stress and mixes sugar and water together into a sweet substance that you can mix into cold drinks with ease. It’s vital in cocktails, from the old-fashioned to the margarita.

It’s also great for warm drinks like lattes and cappuccinos because it doesn’t take as much stirring to blend into the drink.

You can use simple syrup as a vessel to insert flavor as well as sweetness. Cinnamon simple syrup infuses whole sticks of cinnamon for an added taste of fall.

From coffee to cocktails, cinnamon syrup is a good card to have up your sleeve when preparing fall drinks.

To make your own cinnamon simple syrup, you’ll need just three ingredients. I always say to buy the best ingredients you can afford because quality is key when you are dealing with a short ingredient list.

I use cane sugar or granulated white sugar, but you can use brown sugar if you like. It will give the syrup a much darker, caramel color. See this brown sugar syrup.

You can also use maple syrup or honey — just follow my instructions for honey simple syrup and then come back when you remove from heat for the cinnamon infusion. A cinnamon maple simple syrup is what I use in this maple leaf cocktail. So good for the holidays!

Tap water works just fine, but if you happen to have access to filtered water or bottled water, I recommend using that for an even purer taste. It also helps your syrups last longer.

At our house, we use this Soma water pitcher because it is faster (and tastes better) than the water that comes from the fridge.

Cinnamon sticks are Spices do go bad and lose flavor over time, so it’s a good idea to replenish your stock from time to time. Whenever I can, I use high-quality spices for the best-tasting results.

How to make cinnamon simple syrup

Cinnamon simple syrup can be made in a few simple steps:

Here’s a quick look at how to make cinnamon simple syrup in pictures:

First add water to a saucepan.

Then stir in the sugar. You will want to use as much sugar as you use water — a 1:1 ratio.

Stir them together until the sugar dissolves. Try not to let it boil. It’s not a huge deal if it does, but when it boils you will lose water, which will make a thicker syrup, and less of it.

You can also make simple syrup in a blender, but in this case we need the cinnamon sticks to infuse, which will happen faster with heat. Speaking of which…

Remove the mixture from the heat and add the cinnamon sticks to your saucepan. Let it infuse for about 15 minutes.

Sprinkle in one tablespoon of ground cinnamon and stir it up well. Let it infuse just the way the recipe calls for. Then you’ll want to strain out the granules of cinnamon. It will be slightly darker in color, but that should be just fine.

I prefer the cinnamon stick version because the final product is more clear in color, and has the potential to be less gritty and grainy, but if you strain your syrup well you shouldn’t have a problem. It will still taste great!

You can use this syrup in all kinds of cocktails and coffee drinks.

Try it in a cinnamon bun latte — add 1/2 teaspoon vanilla extract to make this taste just like a cinnamon roll!

This cinnamon White Russian is a delightful after-dinner sipper. It even gets a cinnamon sugar rim!

You might already know this syrup from Starbucks’ famous cinnamon dolce latte, but you can use this simple syrup to make one of those lattes right at home!

Just stir in a half an ounce at a time until you reach your desired sweetness.

Would love to know what you think of this easy fall syrup for cocktails!