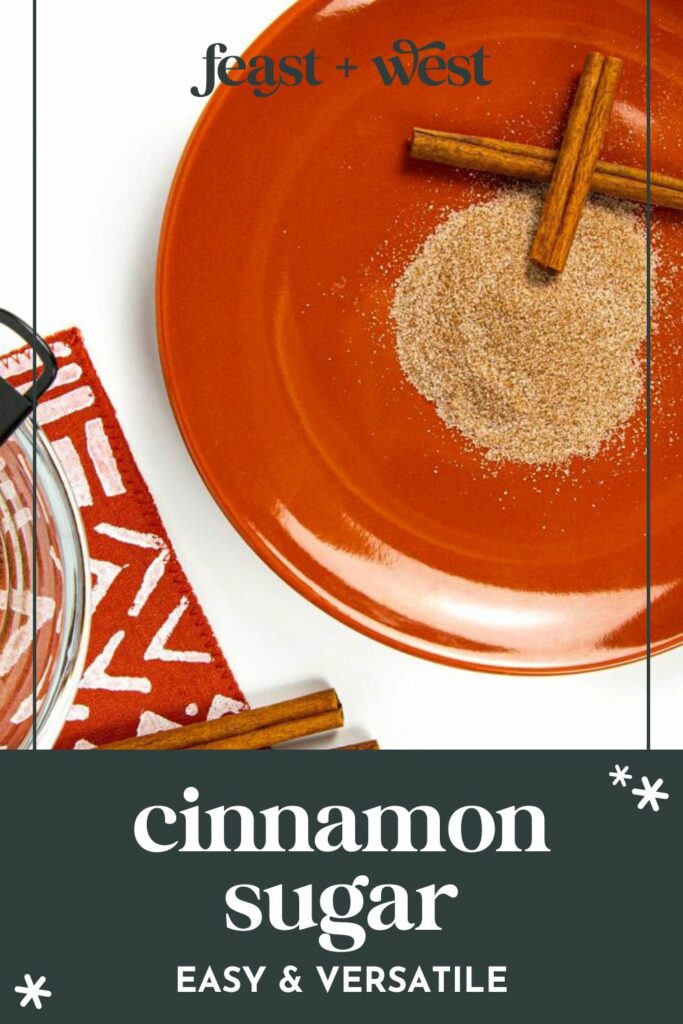 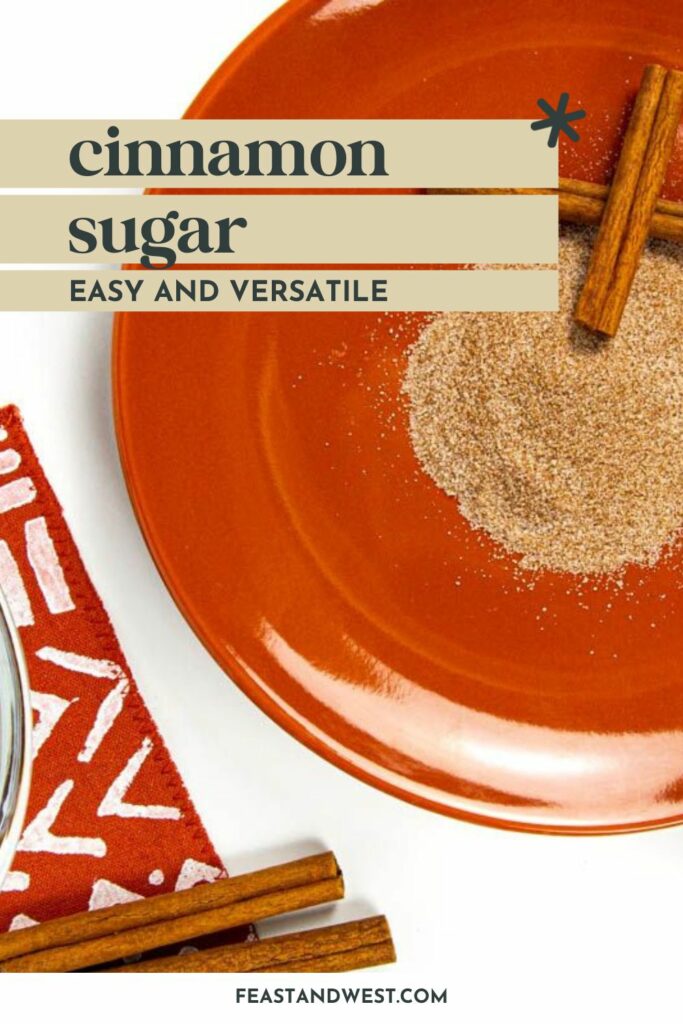 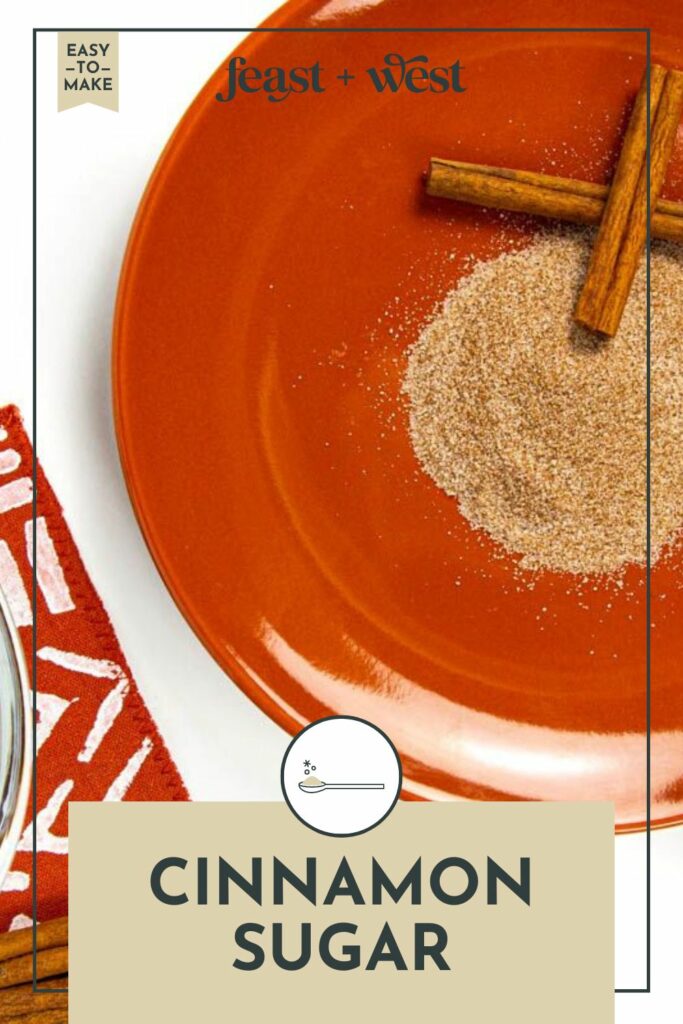 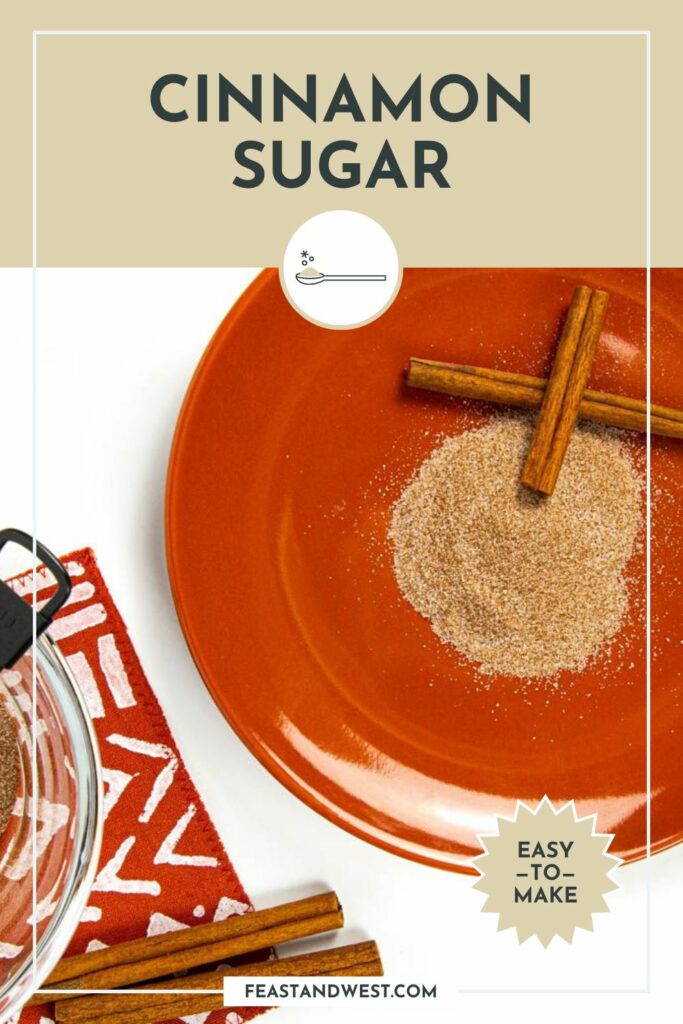 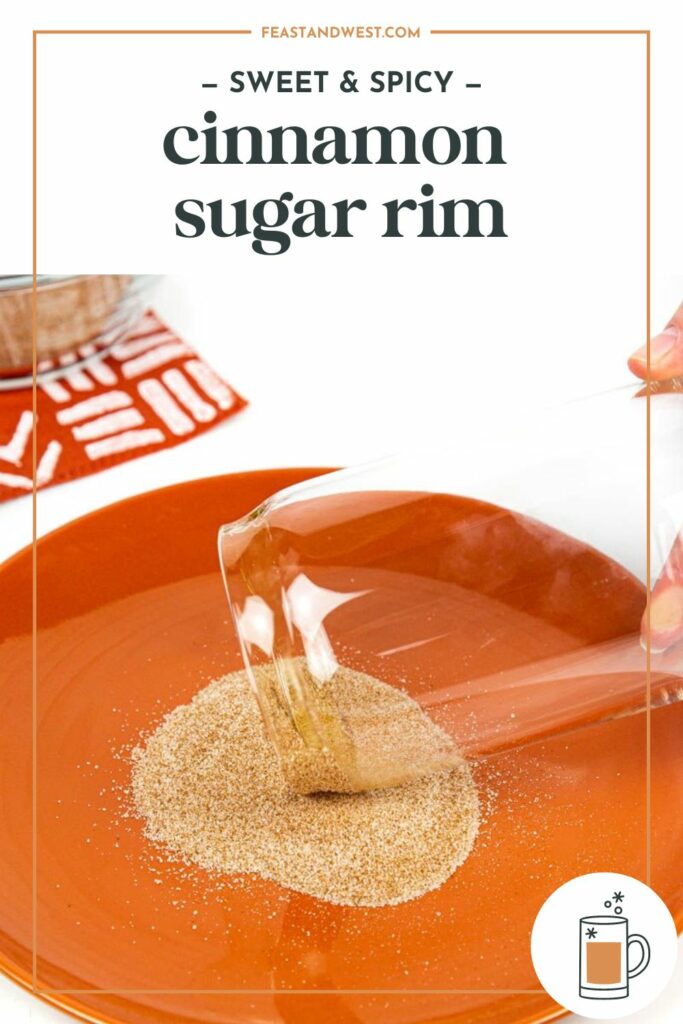 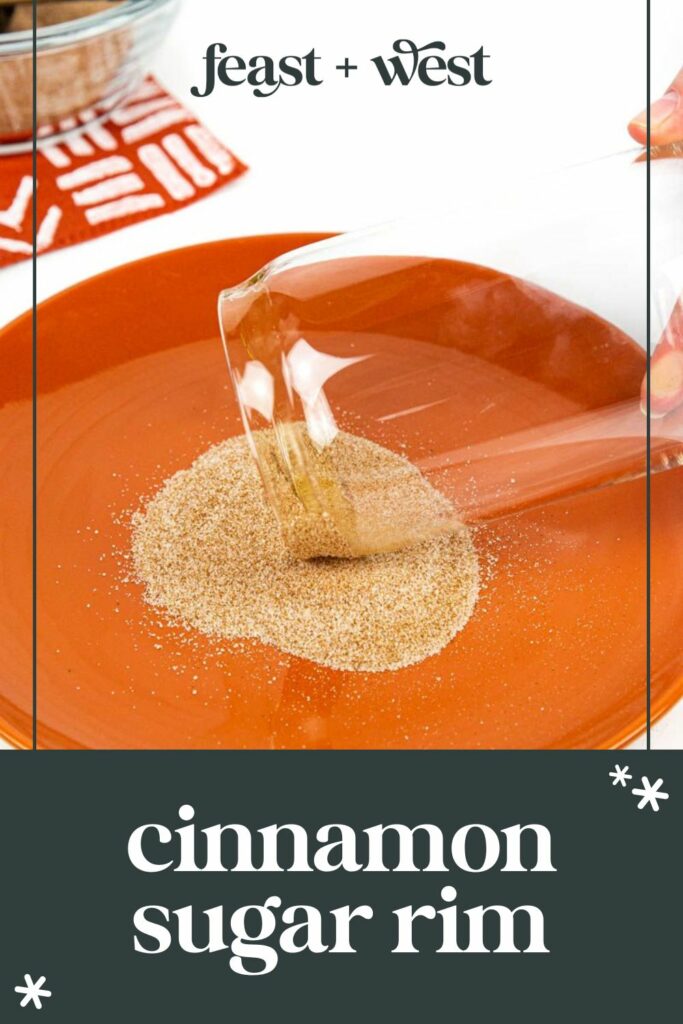 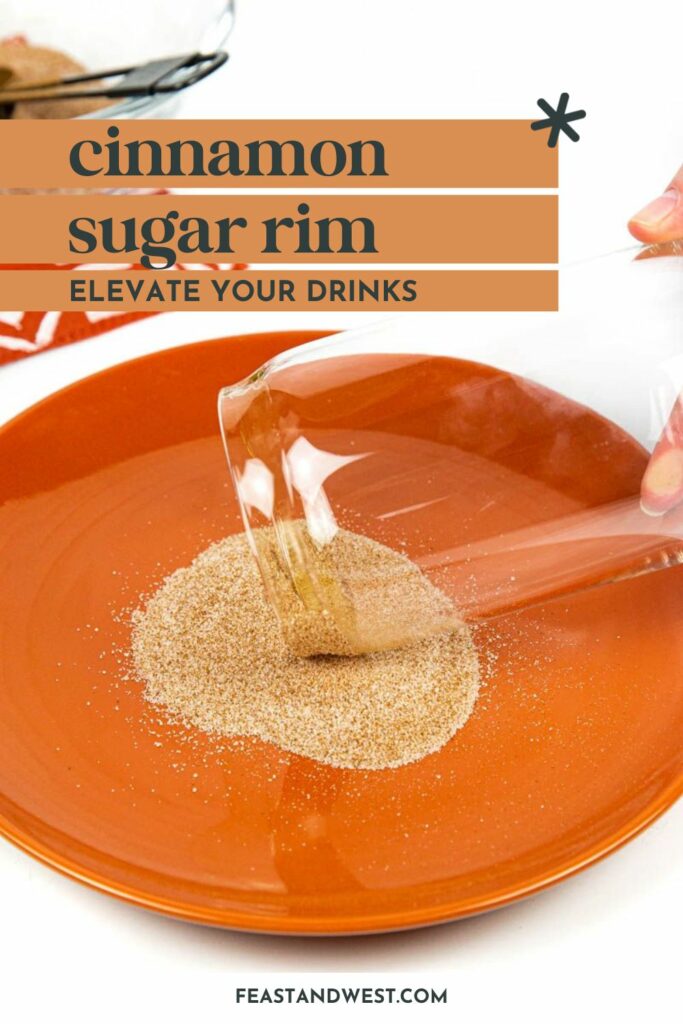 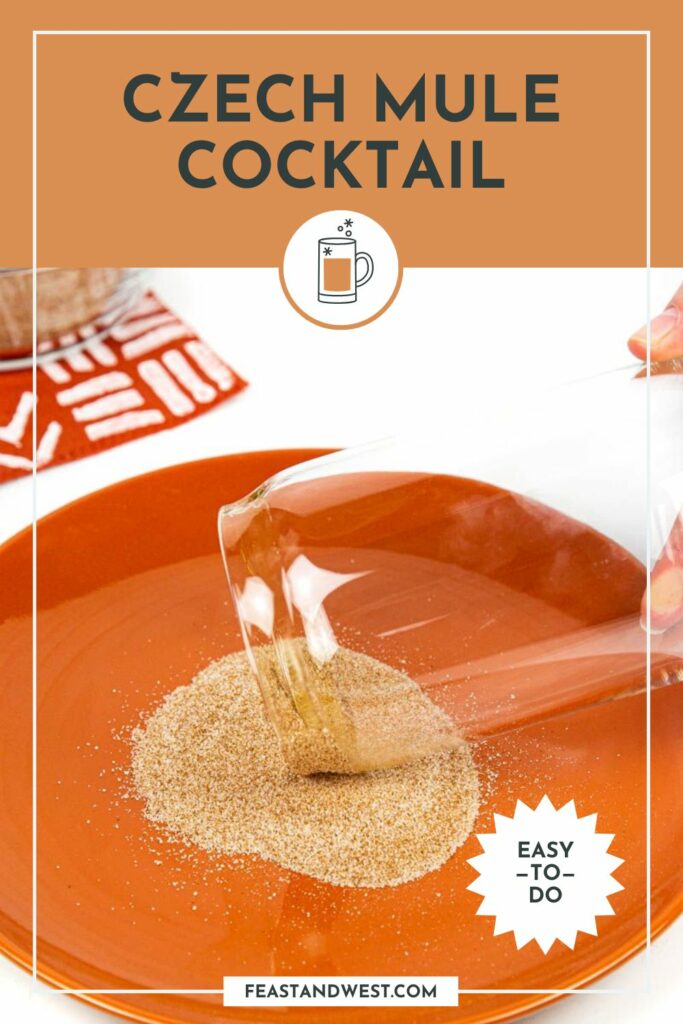 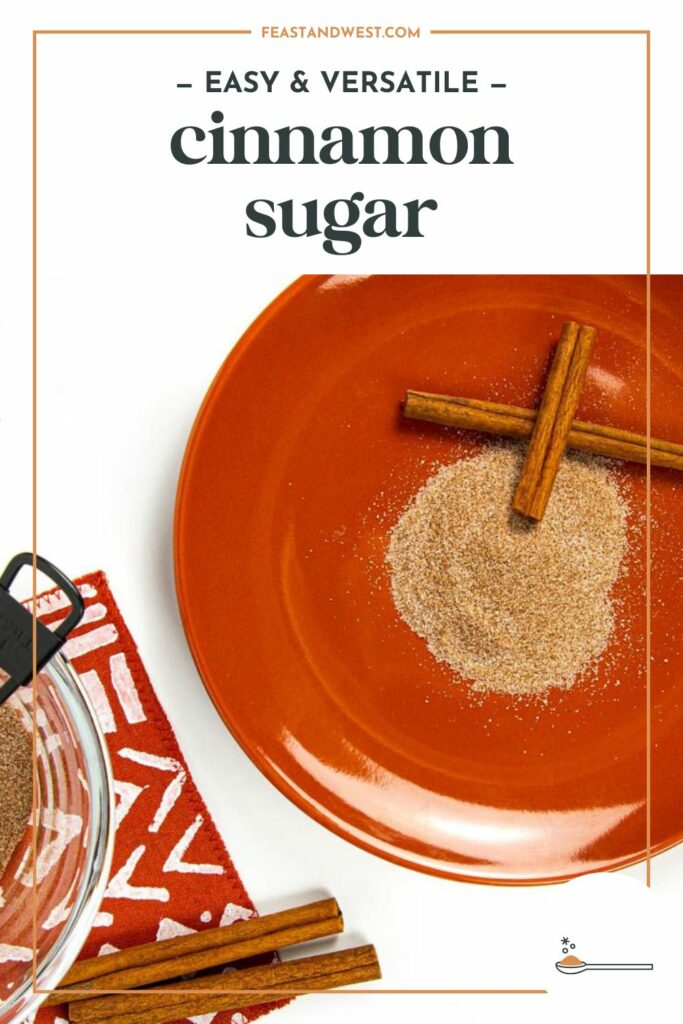 Cinnamon sugar is a necessary ingredient for fall and holiday baking and cocktails. Try it sprinkled on buttered toast, on the rim of your favorite pumpkin ale or as a coating for donuts.

There’s not much that cinnamon sugar can’t make better.

Yes, even beer! I remember the first time I tried cinnamon sugar on the rim of the Christmas Ale from Great Lakes Brewing. Life-changing!

I’ve come to love it on pumpkin beer as well this time of year.

Cinnamon sugar is a versatile ingredient that can be enjoyed in dishes served all day long, from breakfast to dessert to that after-dinner drink.

I love pumpkin spice donuts that have been rolled or shaken in cinnamon sugar especially. Snickerdoodles are another favorite. And then there are cinnamon rolls which are stuffed with cinnamon sugar. Mmm!

You can also stir it right into your morning coffee, or sprinkle it on top of pumpkin bread before baking for a caramelized topping.

And then there’s putting it on the rim of drinks. A cinnamon sugar rim really makes a statement, especially if you serve it during the holidays.

I used it on this cinnamon White Russian, and it just wouldn’t be the same without it. (It calls for cinnamon simple syrup too, which is just divine.)

What is cinnamon sugar?

Cinnamon sugar is a blend of ground cinnamon and granulated sugar that is most-often used for baking.

It’s used around the world on so many dishes, from Mexican churros to Belgian waffles to South African pannekoek.

This magical combination is “sugar and spice and everything nice” personified.

You can buy it already mixed up at the store, but why spend the $5 on a tiny bottle when, if you have sugar and cinnamon already on hand, you can make as much as you want for free?

The name says it all — all you need to make homemade cinnamon sugar is really good ground cinnamon and some sugar.

Whenever I can, I use high-quality spices that are single-origin and ethically sourced. That’s why I love this ground Royal cinnamon from iGourmet.

Spices do go bad and lose flavor over time, so it’s a good idea to replenish your stock from time to time.

For sugar, I use white granulated sugar because it is finer. You can also use cane sugar or brown sugar in a pinch, but the finer type of white sugar will do a better job of mixing with the tiny grains of ground cinnamon.

How to make cinnamon sugar

This is really the easiest recipe you might ever make!

You’re done. I keep mine in an empty spice jar, but you can use a mason jar or even a zip-top bag.

How to make a cinnamon sugar rim

Cinnamon sugar is so good on the rim of a glass for cocktails and for seasonal beers.

Use your finger or a brush to paint on honey, maple syrup or simple syrup around the outer edge of the glass. Try to smooth out any globs or runs.

(Note: You will need an empty glass, as this is impossible to do once you’ve added ice or your drink to the glass.)

Then, roll the edge of the glass in your homemade cinnamon sugar.

Then, fill it with your favorite wintry beer or cocktail! The cinnamon sugar rim will make your Christmas ale or pumpkin beer taste so much more festive.

(The one pictured here is pretty thick — that’s how I like it, but you can absolutely do a thinner one if you prefer!)

If you like fall beers, try it on a ginger pumpkin beer shandy. It’s a beer cocktail that’s really refreshing.

You can also use it for this autumn spice martini and this gin apple pie cocktail. Maybe even an apple cider margarita!

My favorite way is on these apple cider bourbon jello shots. They are so much fun and the cinnamon sugar really makes them amazing.

What will you try cinnamon sugar on next?

Next Welcome to the New feastandwest.com!