Light up your Halloween party with a round of Glow in the Dark Jello Shots! These classy gelatin treats taste just like a vodka tonic with lime. 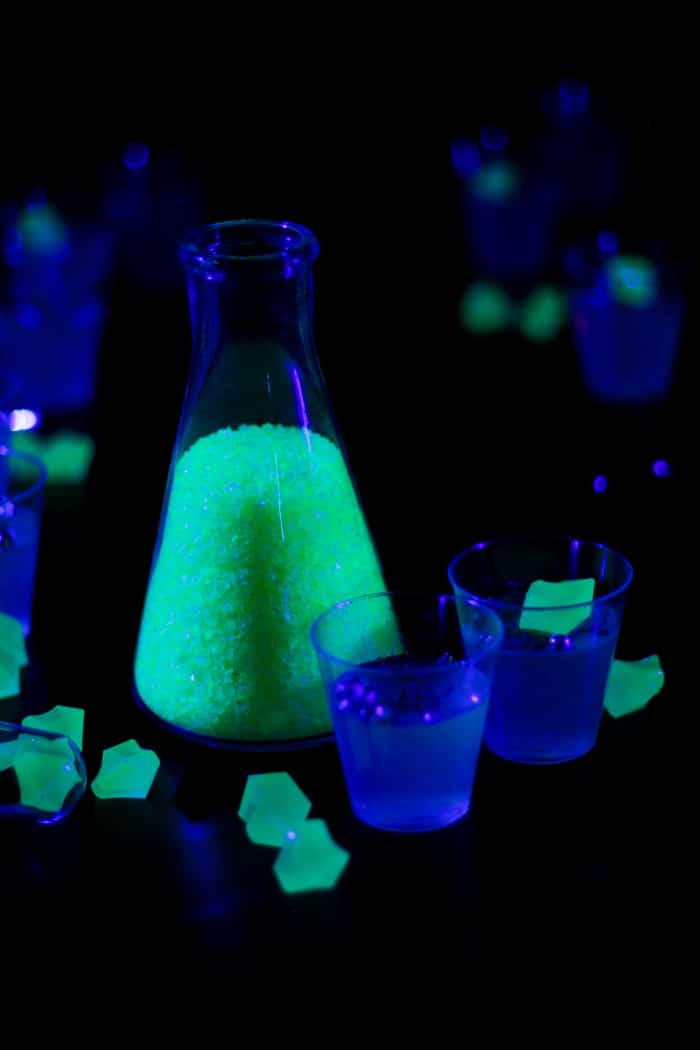 Every year, I tell you how I don’t looove Halloween. And then I get an idea, and I make it, and at some point during the process I realize that I kinda secretly like Halloween a lot.

I’m not anti-Halloween, but I’m probably not ever going to be the kind of lady who decks her house out with faux spiderwebs. A jack-o-lantern or two is about all I will swing. 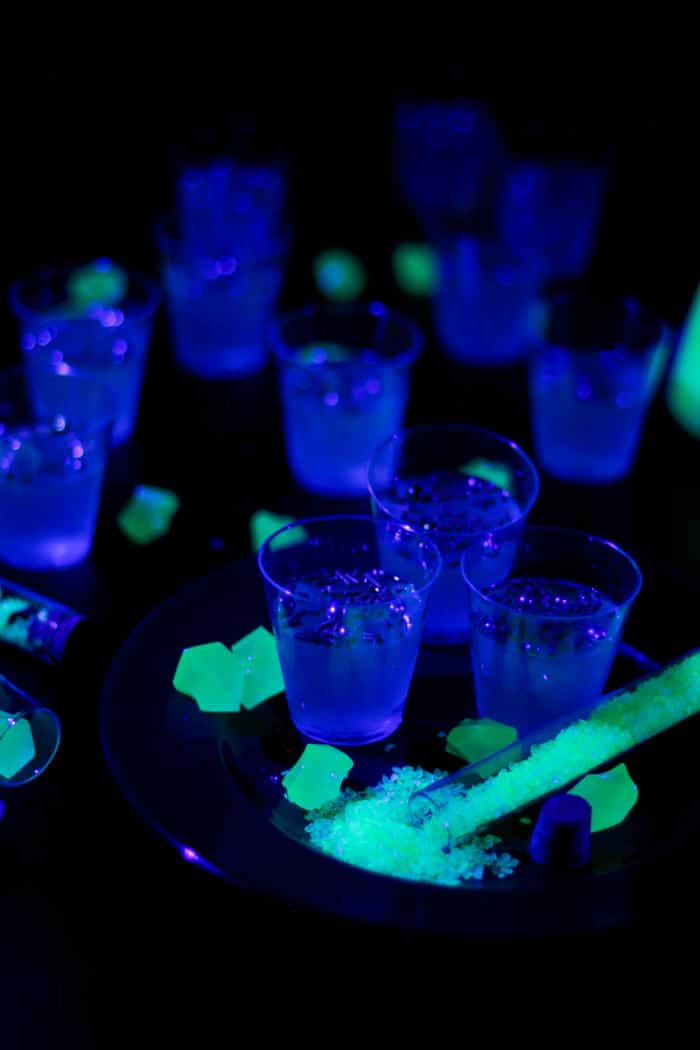 I’d definitely rather eat bloody pancakes instead of watching a bloody horror flick. 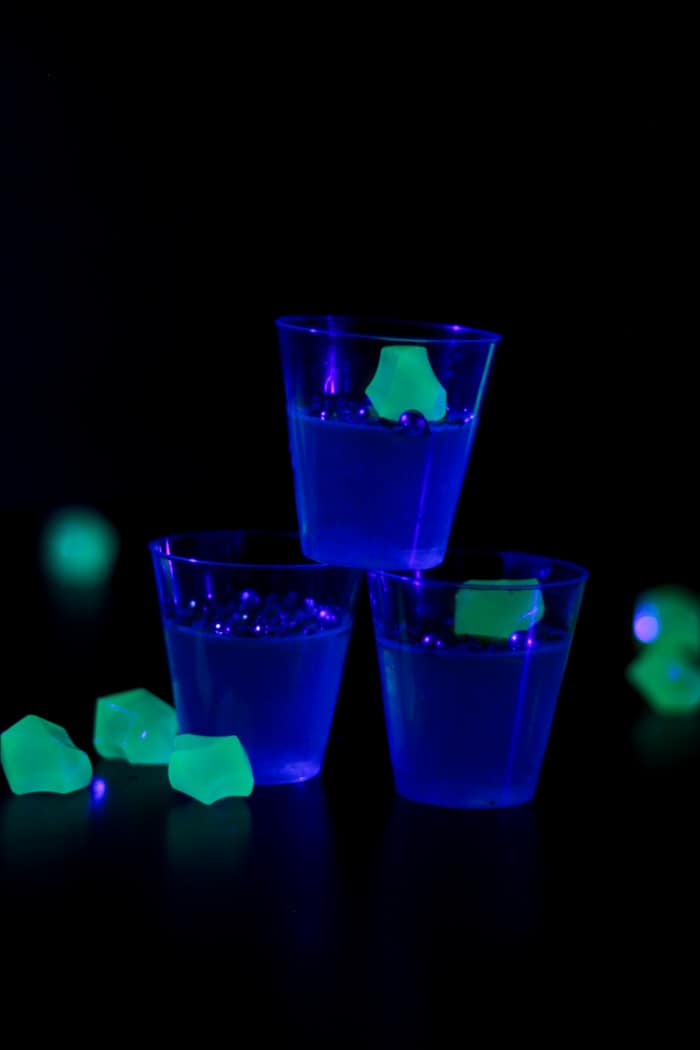 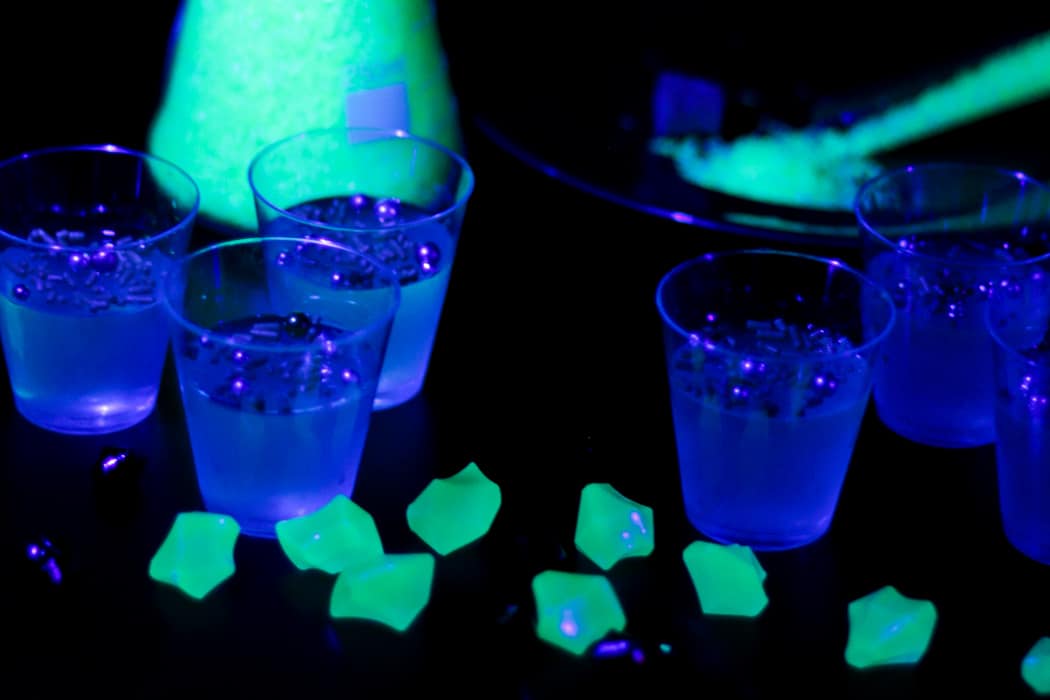 I am all in for the special effects though. Last year I made these Mad Scientist Cocktails, made eerier with dry ice and brightly-colored vodka infused with candy.

So this year I had to go for even more shock factor with these Glow in the Dark Jello Shots.

Edible jello shots that glow in the dark, you ask? Yep. They’re a scream. 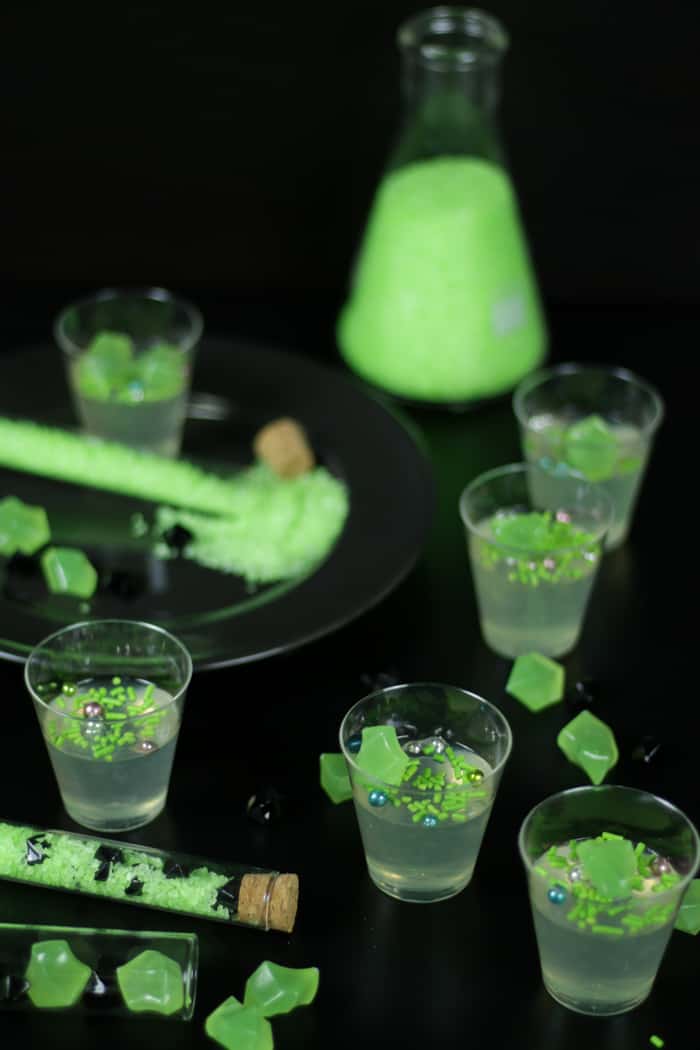 And here they are with the black light: 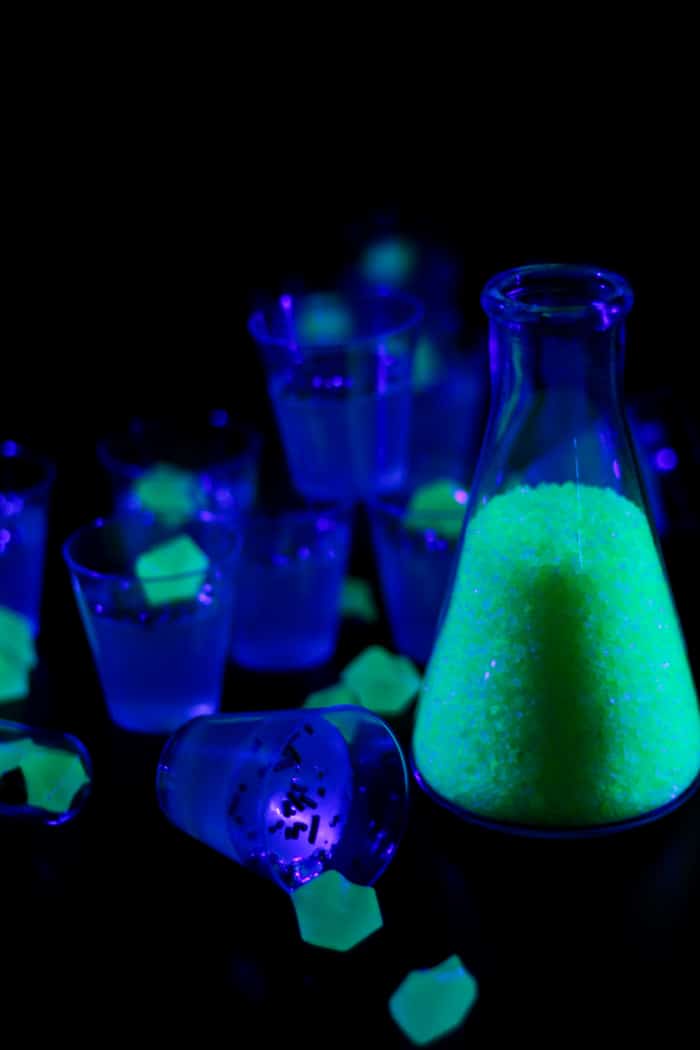 These party treats are actually on the classy side. They’re essentially vodka tonic jello shots, made with limeade and a bit of real lime juice. You can even make them with gin if you’re more of a gin and tonic kind of person!

I topped mine with sprinkles because, well, who doesn’t like sprinkles? (The answer is my boyfriend — but only because I tend to spill them on the floor when I am baking.) 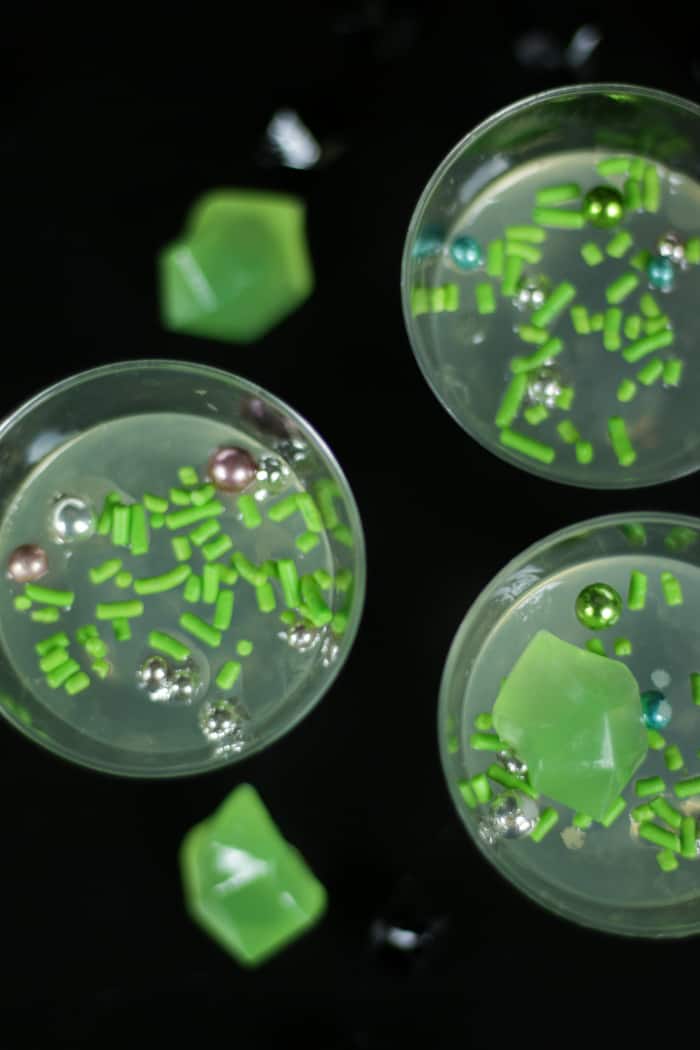 So what makes them glow? That’d be the tonic water.

Tonic water contains small amounts of quinine, which is an alkaloid found in the bark of the cinchona tree and it glows under ultraviolet light. (Fun fact: Quinine is sometimes used to treat malaria.) 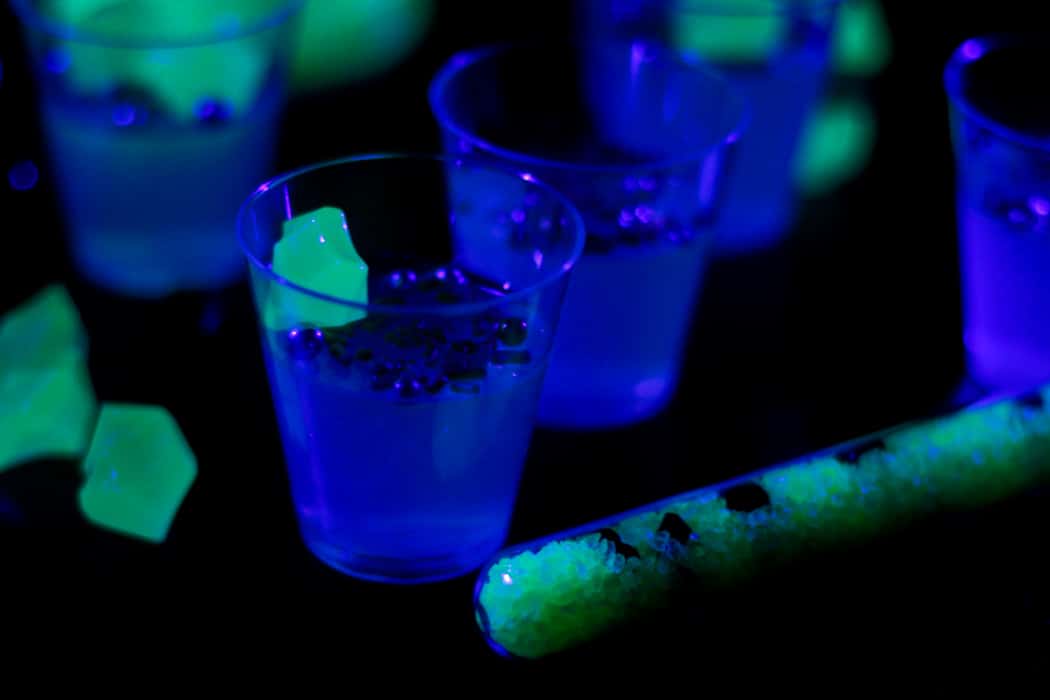 We picked up a couple black lights in order to do this photo shoot, and gosh, was it fun. I think it would be so fun to have a glow in the dark Halloween party with these jello shots!

(Though they are kind of cool in their lime green state too, right?) 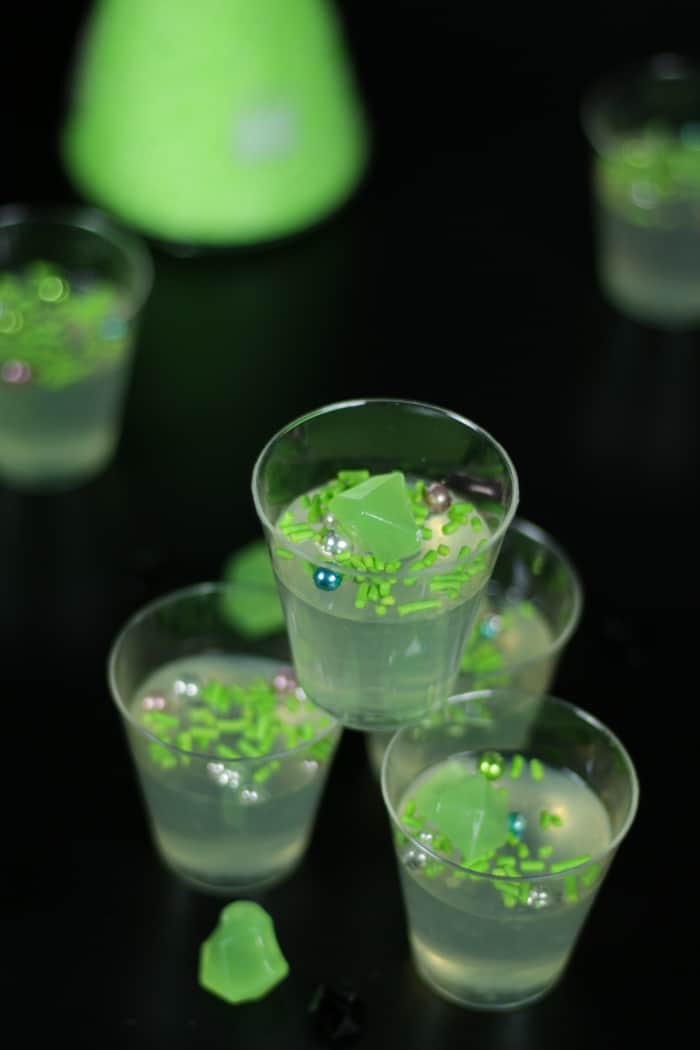 Also! Guess what? My friend Heather put together #TheHalloweenProject again and I’m joining her plus a few friends to bring you even more Halloween tricks & treats:

Search #TheHalloweenProject on social media to find even more spooky treats from past years!

Pin the Glow in the Dark Jello Shots recipe for later!