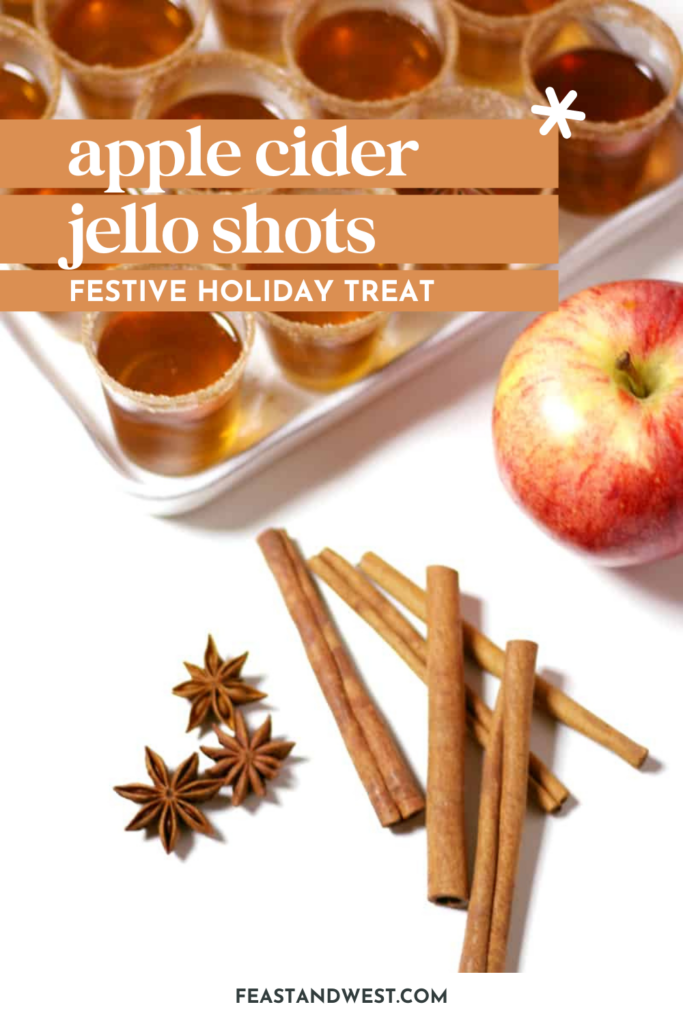 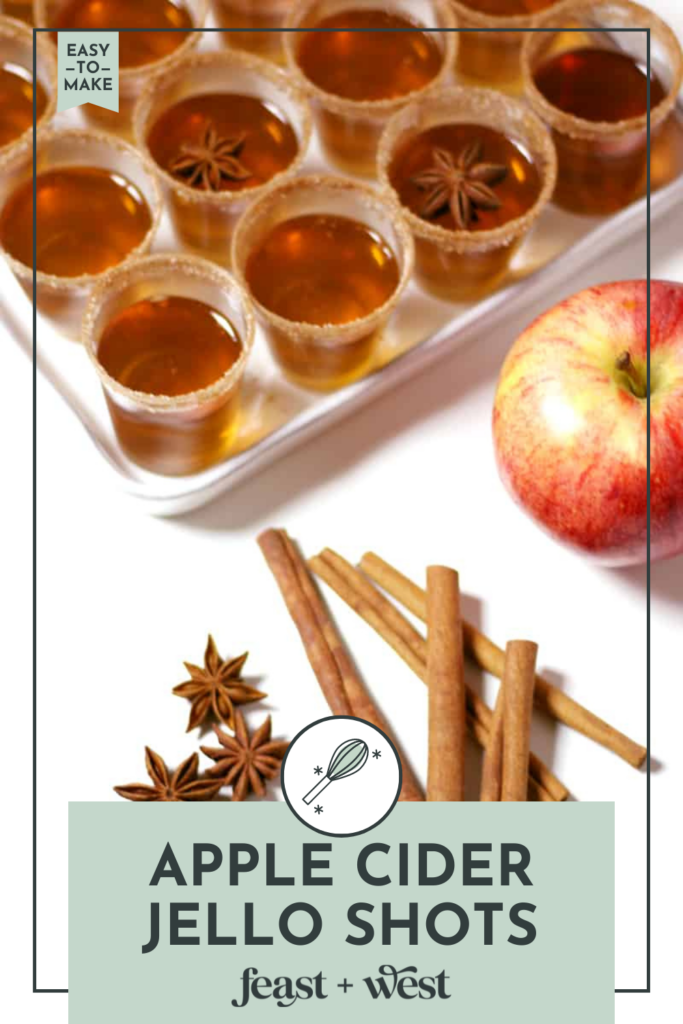 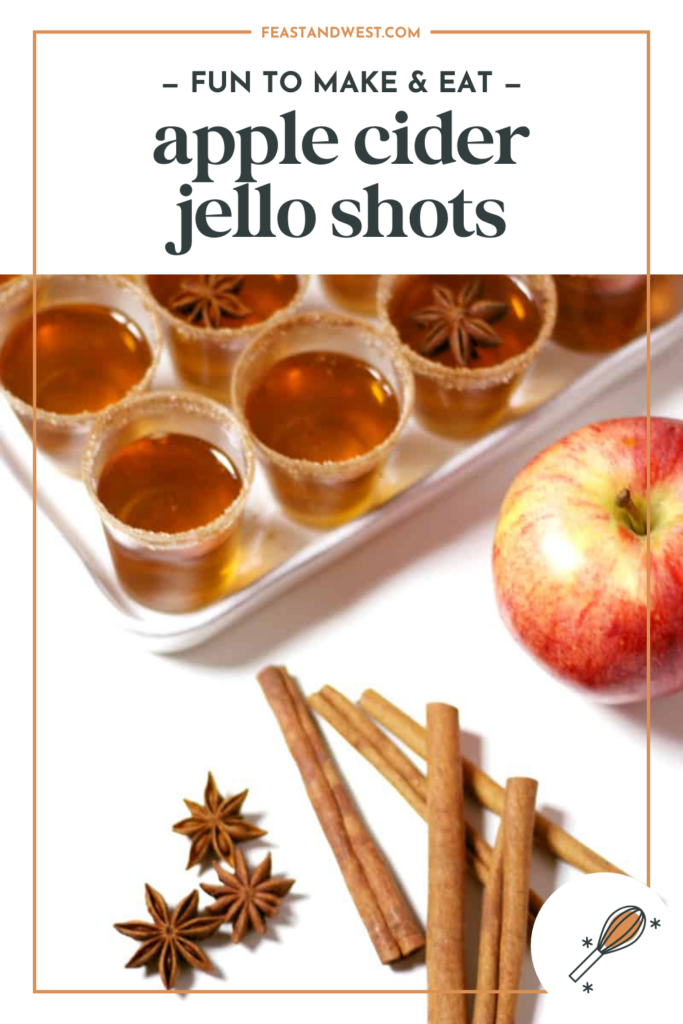 Apple Cider Jello Shots are not your average Jello shot, and they will be the star of your holiday party. Infuse bourbon with cinnamon and combine with Martinelli’s Apple Cider, sugar and gelatin — with an extra cinnamon sugar rim! — to make this festive holiday treat that’s fun for the whole (21+!) family.

This recipe is sponsored by Martinelli’s. Thank you for supporting the brands that support Feast + West!

This shouldn’t surprise you: One of my favorite things about the holidays is getting to make food to share with my friends and family.

The winter season is one of my favorite times to try new recipes because I love sharing that experience with my loved ones.

For example, a couple of years ago, I made Champagne Jello Shots for New Year’s Eve and they were cause for much amusement.

My brother and I laughed and laughed as we showed my mom how to eat a Jello shot. It was so silly!

(Technically, you’re supposed to run your finger around the edge of the cup and just pop it into your mouth. But my mom opted for a spoon! So classy, she is.)

Jello shots are underrated, I think. They get a bad reputation for their part in college party culture. And I get that.

But they’re also an entertaining treat for all ages (21+ of course!) that can still be enjoyed in moderation.

They can even be made alcohol-free if you so choose!

Case in point: My family sometimes does Jello shots at football game tailgates, and it’s a nice way to toast our team as a group before heading into the stadium.

It’s that camaraderie that inspired these Apple Cider Jello Shots with Bourbon.

I wanted to come up with an autumnal dessert drink to enjoy with my family and friends in celebration of the holidays, and I teamed up with Martinelli’s to bring you this super fun and delicious recipe.

While using the jello mixes for jello shots and plain vodka has a time and place, what I love about jello shots is that there’s so much more room for creativity!

I much prefer to make my own flavors of jello shots using unflavored gelatin and delicious raw ingredients, and that’s where Martinelli’s comes in.

Martinelli’s makes an apple cider that I will happily drink cold or hot. It’s both sweet and robust, perfect for sipping.

But it’s also incredible when paired with a cinnamon-infused bourbon in these Apple Cider Jello Shots.

You’ll need to do some stove cooking and gelatin magic to make these Apple Cider Jello Shots, but it’s easy and you’ll kick yourself for not trying homemade Jello shots before now!

Start by infusing your favorite bourbon or whiskey with a few cinnamon sticks.

If you’re not sure what kind to use, I shared all my favorite brands in my bourbon 101 guide. Feel free to use Irish whiskey or rye if those are more up your alley.

Sometimes I like to make some extra cinnamon-infused bourbon for other cocktails later.

Honey whiskey is another great alternative in this recipe because apples and honey are a delicious combination. Caramel whiskey or caramel vodka would work too for caramel apple jello shots.

If you’re not a fan of bourbon, you can try making this with spiced rum.

HOW TO MAKE JELLO SHOTS WITH WHISKEY

To make the Apple Cider Jello Shots, all you need to do is combine the Martinelli’s apple cider and sugar in a saucepan and sprinkle the gelatin over the top.

After a few minutes, the surface will look wrinkled, like a piece of fabric. That’s exactly what you want!

It means it’s time to heat things up. Turn on the stove and stir until the mixture becomes liquid again.

Once everything is dissolved, you can add the spiced bourbon and pour the mixture into your prepared shot glasses.

I rimmed these Apple Cider Jello Shots with a lemon wedge and a cinnamon sugar rim for an added flourish and an extra finishing touch. This extra step will impress everyone!

Your family and friends will love them, and I have a feeling they will become a tradition in no time.

If you love apple cider, try this apple cider Moscow mule or this spiced apple cider rum punch. Both would be really lovely to enjoy for the fall holidays like Thanksgiving.

This applejack Moscow mule doesn’t have apple cider, but it uses an apple brandy called applejack.

For the Jello Shots

For the cinnamon sugar rim

If you don't have cinnamon whiskey on hand, feel free to use Fireball or any other bourbon.