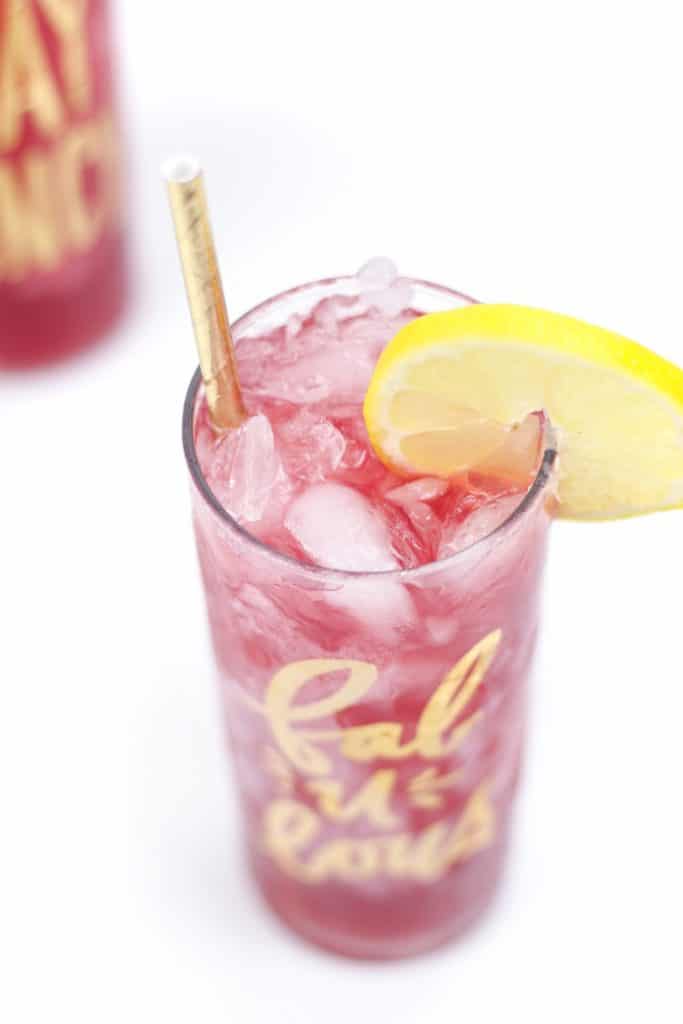 A drink for the races, the Belmont Jewel cocktail is the #1 drink for toasting the Belmont Stakes. Bourbon, lemonade and pomegranate juice served over crushed ice make for a fruity punch that’s delicious all summer long.

Tomorrow is the last race in the famed Triple Crown of horse racing. If California Chrome wins the Belmont Stakes in New York this weekend, then he’ll have won the entire trio.

It hasn’t been done since the horse Affirmed did it in 1978, so it will be a big deal if this guy and his horse can pull it off.

(Update: California Chrome did not win the Triple Crown this time!)

Did you know there’s an official cocktail for each leg of the Triple Crown?

For all of the races, I thought it would be fun to share recipes for the official drinks of each, and today’s the final leg in this relay.

First, in honor of the Kentucky Derby we have the Classic Mint Julep, which is a strong, classic cocktail made with fresh mint, sugar and sweet Kentucky bourbon. I also have a non-alcoholic mint julep recipe that’s really good.

The julep is a fun cocktail to play with. The Basil Julep, for example, is a variation made with basil simple syrup.

Next up is the Preakness Stakes cocktail, the Black-Eyed Susan cocktail. This one is a vodka drink with elderflower liqueur and pineapple, lime and orange juices.

To round out the trifecta of Derby cocktails, today’s drink is the Belmont Jewel cocktail, but it wasn’t the first of the official Belmont Stakes cocktails.

In addition to the current Belmont Jewel cocktail, the Belmont Stakes has had a plethora of other cocktail recipes over the years, a stark departure from the mint julep’s fame at the Derby.

A drink of vodka, peach schnapps, orange juice and cream, called the White Carnation, was the official drink until 1998.

Then, in 2012, the Belmont Breeze took the stage with its complicated combination of whiskey, sherry and a host of fruit juices.

The Belmont Jewel cocktail seems both simpler and more unique in flavor than its predecessors — small batch bourbon, pomegranate juice and lemonade.

I think it was a good move, as neither the White Carnation nor the Belmont Breeze strike my fancy. And it’s a much cuter name!

Bourbon, lemonade and pomegranate all go so well together. The lemonade brings a touch of sour and the pomegranate brings the sweetness, and it’s a well-balanced drink.

All right, and so we’ve come to the finish line. For now, this recipe concludes my horse racing cocktail series.

Which one was your favorite cocktail? The Kentucky Derby mint julep, the Preakness Stakes Black-Eyed Susan or the Belmont Jewel?

Though I’ve always been a julep fan, this one totally strikes my fancy!

I’ll totally be enjoying one of these Belmont Stakes cocktails all summer long, whether it’s horse-racing season or not.