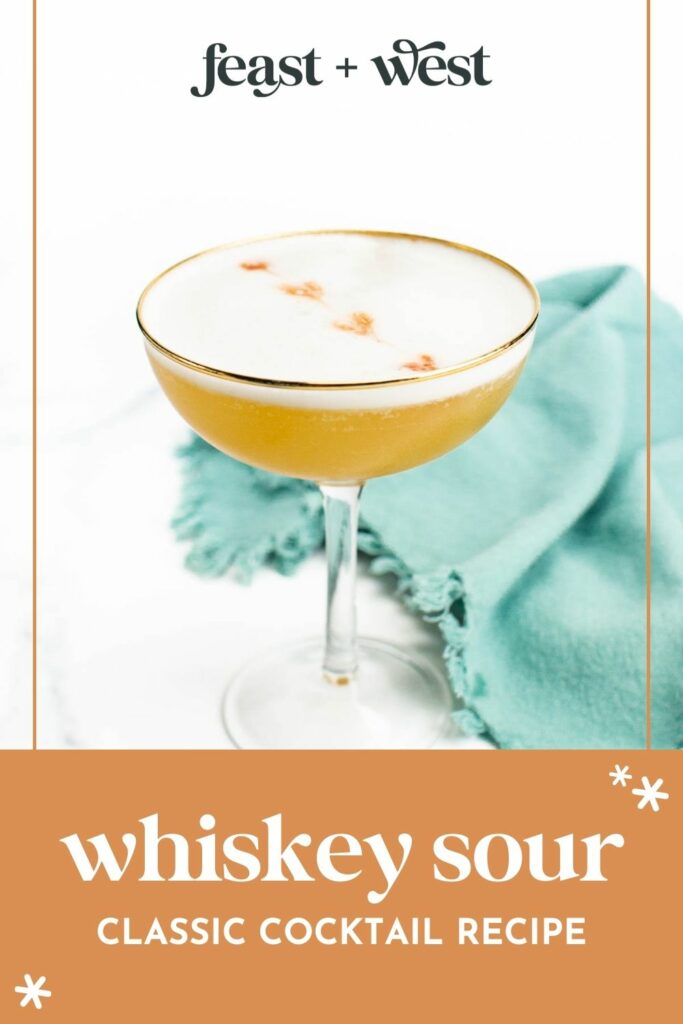 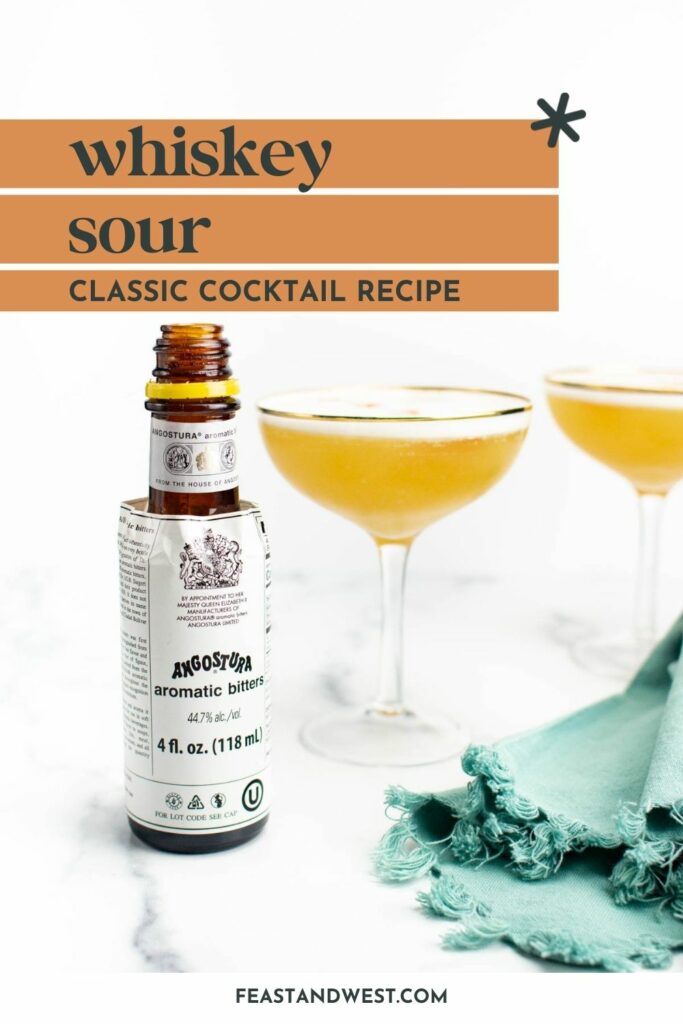 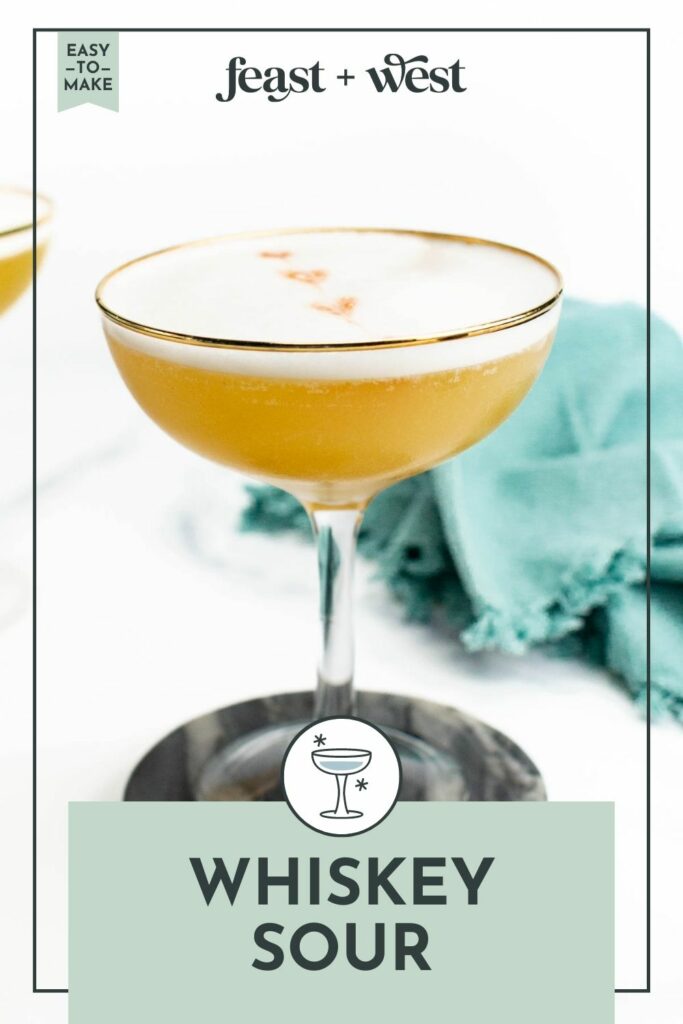 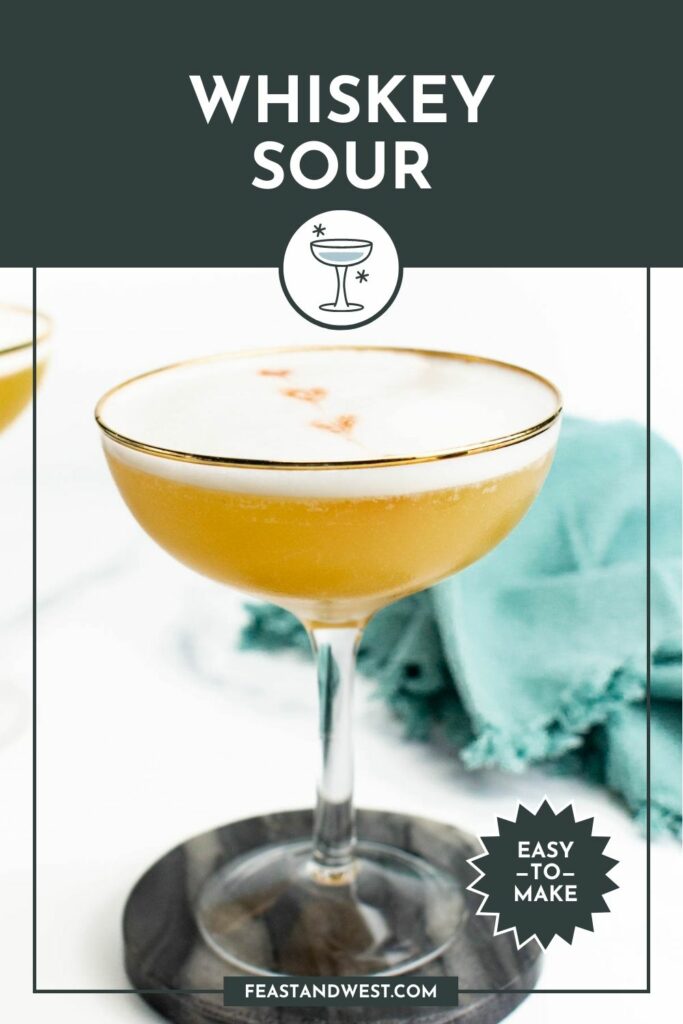 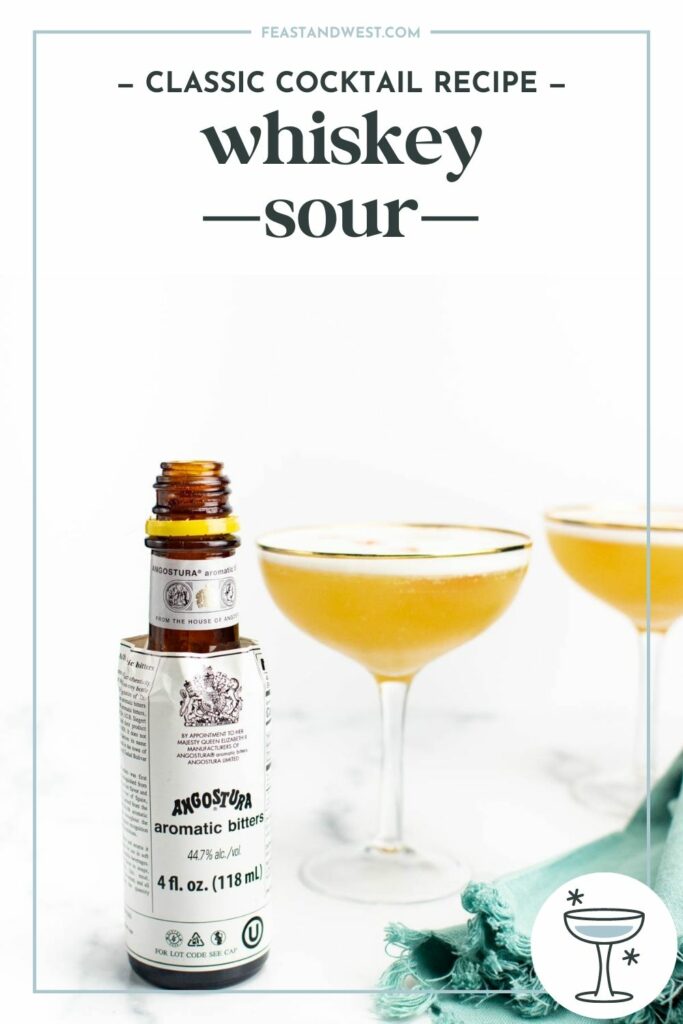 The Whiskey Sour is a perfectly balanced classic cocktail with elegance and grace. Beloved around the world, it’s an easy recipe with tons of variations and ways to make it your own.

A perfect trio: tart lemon, sweet sugar and strong bourbon. These three can do anything.

In the Whiskey Sour, they’re inimitable together.

Smooth, sweet and a little strong, this cocktail is a classic, and for good reason.

Let’s get into the history of this amazing cocktail, plus tips for how to make it and its many variations.

Why you’ll love the whiskey sour

There’s a lot to love about these classic cocktails:

What is a whiskey sour?

The Whiskey Sour is from the Sour cocktail family, which means it is made with the Golden Ratio of Cocktails.

Sours always contain a spirit, some sort of sweetener and some kind of citrus. For example, the margarita is made with tequila, agave and lime juice.

The Whiskey Sour calls for bourbon, simple syrup and lemon juice. It has a number of variations, including the New York Sour and Scotch Sour. (See section below called Variations.)

Sometimes it has a fourth element: egg white. The egg white adds a thick, smooth, silky texture to a cocktail. (I love it in the Pink Lady and the Ramos Gin Fizz.)

When the egg white is added, the cocktail is sometimes called a Boston Sour. If egg white isn’t your thing, you can skip it and serve the Whiskey Sour on the rocks.

History of the whiskey sour

The Whiskey Sour goes back a long way. It’s said that sailors invented the Sour cocktail to avoid scurvy on the open seas.

Several Sour cocktails, including the Gin Sour and the Brandy Sour, were first mentioned in The Bartender’s Guide by Jerry Thomas in 1862.

Later, a Wisconsin newspaper, the Waukesha Plain Dealer, first wrote about the Whiskey Sour cocktail (with the British spelling, “whisky”) on Jan. 4, 1870.

Since then, the Whiskey Sour has found its way onto bar menus everywhere. It even has its own national holiday — National Whiskey Sour Day is Aug. 25 each year.

You only need four ingredients to make these popular cocktails. Here’s what you’ll need to make a whiskey sour:

Bourbon brings its sweet, oaky, caramel flavor to the Whiskey Sour. You can use just about any bourbon you can find.

My go-to brands are Old Forester, Bulleit, Woodford Reserve, Angel’s Envy and Maker’s Mark. If you have a favorite, use that. Check out my crash course on this spirit, Bourbon 101, for more about this amazing, versatile spirit.

Another type of whiskey, such as rye or scotch, can be used instead of bourbon. You can even use a flavored bourbon, like cinnamon whiskey.

If you want to switch up the spirit to, say, tequila, you can make a tequila sour. With amaretto, you make an amaretto sour.

Fresh lemon juice will yield the freshest-tasting Whiskey Sour, but I know how handy the bottled concentrate is and it will work in a pinch.

You can also use another type of citrus like lime, orange or grapefruit juice if you like.

Sour mix is great to keep on hand if you make Whiskey Sours a lot. It’s basically a bottled concoction of lemon juice and simple syrup, raring and ready to go in the fridge.

Classic simple syrup is a simple mixture of water and sugar. This liquid sweetener is a must to keep in your fridge for all kinds of cocktails, from the mojito to the old-fashioned.

Simple syrup is typically made with granulated sugar, but other types may be used such as this brown sugar simple syrup.

You can also make a flavored syrup such as lavender simple syrup, basil simple syrup or cinnamon simple syrup for some tasty flavor combinations. (See the section called Variations below.)

Instead of simple syrup, you can use other types of sweeteners, like honey, maple syrup or agave. (If using honey, you’ll want to make a honey syrup first.)

Shaken egg white is what creates the foamy, white layer on top of the cocktail, and provides a silky and smooth texture to the drink. Sometimes adding egg white to a Whiskey Sour is called a Boston Sour.

My grandmother once told me she went on a cruise during which she fell in love with whiskey sours, but she was notoriously an egg hater! I’m certain that the whiskey sours she enjoyed were not Boston Sours.

If you’d rather skip the egg white, you can stop right here but I encourage you to give it a try. However, when using raw eggs in a drink, there are some safety measures to keep in mind. Please see the section below called Are egg whites in drinks safe?.

The Whiskey Sour has a few must-have garnishes:

Are egg whites in drinks safe?

Eggs add a host of outstanding qualities to a cocktail. They can add thickness and silkiness, which is very evident in cocktails like eggnog. Some people may be worried about an “eggy” taste, but it’s actually quite subtle.

Be sure to buy pasteurized eggs in the shell, which is the USDA recommendation for any food or drink that includes raw eggs. Pasteurized eggs are gently heated in their shells, just enough to kill any bacteria. If needed, you can pasteurize eggs at home.

How to separate the egg white

I like to use this egg separator tool for removing the yolk. Just rest it over the edge of your cocktail shaker and crack the egg into it, then toss the yolk.

(Or refrigerate it in a covered container for tomorrow’s breakfast!)

How to make a Classic Whiskey Sour

Whether you make your whiskey sour with or without egg white, making a whiskey sour is an incredibly easy drink. Get out your cocktail shaker and let’s get started.

How to make a Whiskey Sour without egg white

Here’s how to make a whisky sour that doesn’t contain egg white:

How to make a Boston Sour

The Boston Sour is a Whiskey sour with egg white. Here’s how to make it:

The beauty of the whiskey sour is that you can customize it to your heart’s content, way beyond just egg white or no egg white.

The most famous variation is a New York Sour, which has a few bar spoons of red wine layered on top. The Continental Sour is similar, which uses port wine.

Use different types of whiskey.

Different types of whiskey can dramatically alter the flavor profile of a whiskey sour.

Mix up the type of sweetener.

Changing up the type of sweetener you use can help you dream up fun flavor combinations and up your whiskey sour game.

Change up the citrus.

Lemon juice or sour mix is most common for a whiskey sour, but you can change things up. Try one of these variations:

The whiskey sour is incredibly versatile and you can dream up tons of combinations. Here are a few ideas to get you started:

Make it non-alcoholic. Use a zero-proof spirit such as Ritual whiskey alternative (affiliate link).

Serve it up or on the rocks. The cocktail can be made with egg white and served up. If served without egg white, it should be served over ice.

What to pair with a whiskey sour

Both sweet and savory foods work well with a whiskey sour.

If enjoying with appetizers, fix a charcuterie board with cured meats and a mix of cheeses like cheddar, brie and blue cheese, or go for a simple baked brie with crackers.

Here are some more whiskey sour recipes to try:

Let me know if you try this recipe! I would love it if you would leave a ⭐️⭐️⭐️⭐️⭐️ review or comment below to tell me how it goes.

Instead of simple syrup: You can use honey syrup, maple syrup, agave nectar or a flavored simple syrup.

Previous Jello Shots 101: Everything You Need To Know

Next Cocktail Garnish Ideas for Summer