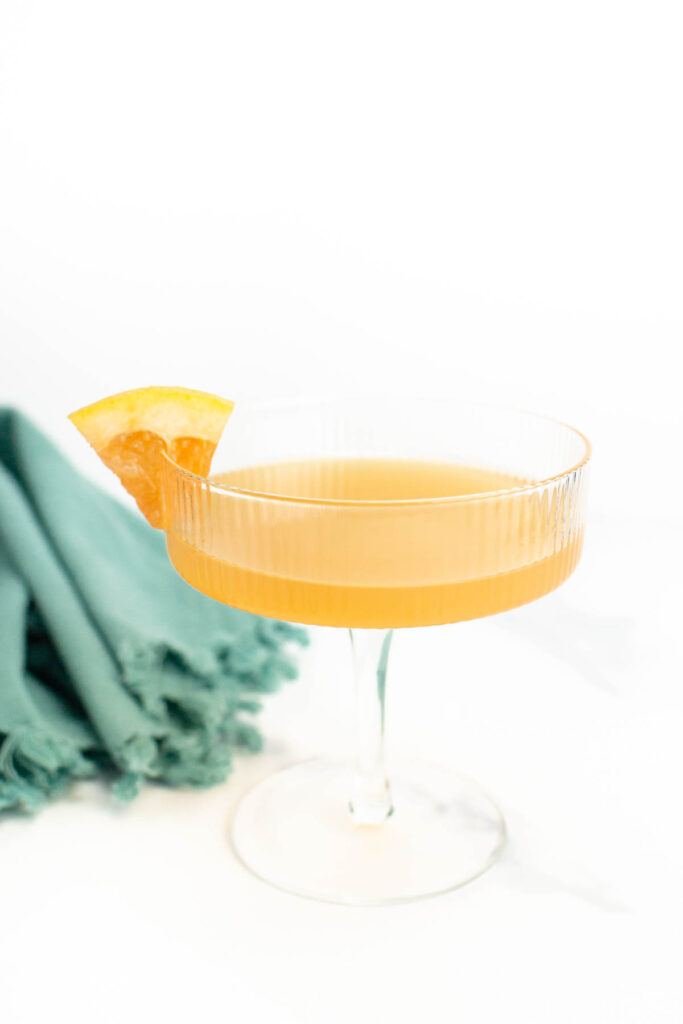 The Brown Derby is a classic cocktail made with grapefruit and whiskey. A true Old Hollywood drink, you will be feeling fancy in no time with one of these drinks in hand.

From the paloma to the grapefruit mule, grapefruit adds a tart and bitter quality to cocktails.

Add the Brown Derby cocktail to the list. It’s a bright, sweet and slightly tart cocktail made with honey, grapefruit and whiskey.

Based on the name, you might think it’s a Kentucky Derby cocktail (à la the mint julep) but it’s not.

This classic cocktail is a vintage cocktail named for a notable restaurant of the Golden Age of Hollywood.

History of the Brown Derby

According to Dale DeGroff’s 2002 book, “The Craft of the Cocktail,” the Brown Derby was first served in the 1930s at the Vendôme Club in Los Angeles and was named for a notable restaurant called The Brown Derby.

The recipe for this grapefruit drink was first printed in the 1933 book Hollywood Cocktails, as well as in the 1930 book The Savoy Cocktail Book by Harry Craddock, but under a different name, the De Rigueur Cocktail.

The Brown Derby was a famous chain of Hollywood restaurants in the 1920s and 30s. The first and best known was shaped like a brown derby hat (see a photo) but there were other locations around Los Angeles.

Dining at one would likely result in a celebrity sighting, so they became popular restaurants. It is said that Clark Gable proposed to Carole Lombard there and it is the scene for one of the Hollywood episodes of I Love Lucy (“L.A. at Last”).

Even though the Brown Derby itself is closed, you can still enjoy some of the glitz and glamour of Tinseltown at the replica Hollywood Brown Derby restaurant at Walt Disney World’s Hollywood Studios in Orlando.

Though Disney’s menu doesn’t appear to offer the Brown Derby cocktail, you can order the famous Brown Derby Grapefruit Cake.

You only need a few ingredients to make a Brown Derby cocktail.

Have you ever tried to mix honey into a drink? As soon as it hits ice, it seizes up and becomes harder to dissolve.

The answer is honey syrup, which is honey mixed with hot water to create a liquid sweetener that’s much easier to stir into a drink. (It’s also sometimes called “runny honey.”)

It’s similar to a simple syrup, which you could use instead if you don’t have honey on hand to make honey syrup.

Honey syrup is made with equal parts honey and hot water. It’s so easy to make.

As with any citrus, it’s best to use fresh grapefruit juice for this cocktail, so pick up a ripe grapefruit at the grocery store. Hint: It will be a little easier to juice your grapefruit if it’s room temperature.

You can use any kind of juicer, but my favorite is my electric juicer (affiliate link).

If you use citrus a lot and have the cabinet space, you will NOT regret getting one of these, I promise! It makes juicing citrus so easy — you can use it for lemons, oranges and limes too. It does a great job of getting allllll the juice out of each fruit.

You can also use a citrus squeezer (affiliate link) (though it will take some hand strength!), a reamer or a hand juicer. Here are some of my favorite juicers:

Bourbon brings its sweet, oaky, caramel flavor to the Brown Derby. You can use just about any bourbon you can find.

My go-to brands are Old Forester, Bulleit, Woodford Reserve, Angel’s Envy and Maker’s Mark. If you have a favorite, use that.

Check out my crash course on this spirit, Bourbon 101, for more about this amazing and strong spirit.

How to make a Brown Derby

Making this classic grapefruit cocktail is super easy. Here’s what to do:

First, make your honey syrup. Combine equal parts of honey and water in a saucepan and stir until combined. (You can also warm up hot water in the microwave, then stir in the honey to melt it.) Let cool slightly before using.

Then, measure out your bourbon, grapefruit juice and a little bit of honey syrup into a cocktail shaker filled with ice.

Shake it really well and then strain it into a coupe glass. Garnish with a piece of grapefruit peel or a grapefruit slice.

Maple Brown Derby. Use maple syrup instead of honey syrup.

Irish Brown Derby. Use Irish whiskey instead of bourbon to make this drink. (Or use any other type of whiskey.)

Rosemary Brown Derby. Infuse rosemary with your honey syrup. See this rosemary simple syrup recipe and use honey instead of sugar.

In the mood for another classic bourbon cocktail? Try one of these:

For more Hollywood cocktails, try one of these recipes:

For the honey syrup