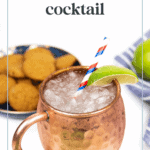 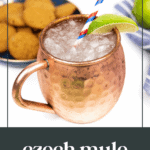 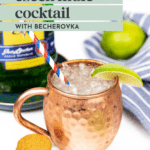 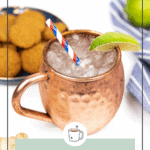 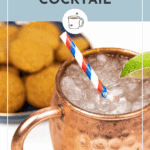 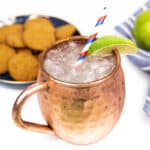 “It tastes like a Christmas tree!” someone yelled as the bartender passed around a tray of shots.

The shot glasses were filled with a light yellow spirit called Becherovka, the herbal spirit my friends and I discovered when we studied abroad in Prague during college.

And… it did. With notes of cloves, anise, citrus and ginger, the liqueur tasted just like a Christmas tree.

Bright and piny, a shot felt like shards of sharp pine needles were pricking your throat, but then settles into an herbal, spiced sweetness — like a Christmas cookie — that makes you want another shot.

Whiffs of fir trees, certain gins and Becherovka will always take me back to that dark corner bar in the middle of Praha 3.

Like my gingerbread mule made with absinthe, this Czech Mule is another cocktail inspired by my trips to Prague.

Once I got into mules, I realized flavorful Becherovka would be an ideal partner for spicy ginger beer and zesty lime juice, not unlike a gin mule.

And that’s just what this cocktail is: a Moscow mule featuring the Czech spirit Becherovka, lime juice and ginger beer.

Becherovka is a liqueur from the Czech Republic made from a secret concoction of more than 20 herbs and spices. Yes, 20!!!

Pronounced beck-uh-rohv-kuh, its flavor is rich and complex, and some people refer to it as “Czech Jagermeister.”

According to Wine Enthusiast, Becherovka liqueur dates back to the early 1800s, when pharmacist Josef Vitus Becher began experimenting with liqueurs and sold a remedy for stomach illnesses called “English Bitter.”

Then in the 1940s, the communist government of then-Czechslovakia limited exports of Becherovka. The regime even forced a descendant of the founder to disclose the secret recipe. (She later made an identical recipe in West Germany and sold it to a brand called Underberg.)

After almost 60 years of state-ownership, Becherovka was reprivatized in the late 1990s and today is a favorite in the Czech Republic and abroad.

Though its flavors of licorice, cinnamon and ginger make it sound like a holiday spirit, it’s actually enjoyed year-round in the Czech Republic, often as a digestif.

Though it can be served at room temperature, but many Czechs keep a bottle in the freezer. Feel free to drink it straight, or use it to make a Becherovka cocktail like this mule recipe!

What is a mule cocktail?

The Moscow mule is an alcoholic cocktail traditionally made with vodka, lime juice and ginger beer. It’s an easy-to-make, quaffable drink that can be enjoyed all year long.

Although it’s called a “Moscow” mule, it’s actually an American drink. The name refers to the vodka, not its origin.

It is often served in a copper mug (affiliate link), but feel free to use a glass if you don’t have one handy!

I will say… If you’re a mule lover, it might be time to invest in some mugs! Here are some of my favorite mugs:

The beauty of the Moscow mule recipe is that it’s very versatile and can be made with myriad flavors and spirits.

Switch up the lime juice: These grapefruit mules and kumquat mules are made with other types of citrus juices. You can also use blood orange or lemon.

Add other flavors with juice: The Yule Mule is a holiday Moscow mule that brings in cranberry juice or pomegranate juice. For apple cider mule uses spiced apple cider.

Change the spirit: This applejack mule pulls in apple brandy instead of vodka to give it a new spin. The Dark & Stormy is the name for a mule that uses rum.

You only need a few ingredients to make one of these Becherovka cocktails.

The United States receives imports of the Czech herbal liqueur and you can find it in many liquor stores, though it is more rare than other imports. Look for a dark green bottle with a blue-and-yellow label.

Becherovka, which is owned by Pernod Ricard, also makes a lemon version called Becherovka Limond. I’ve not tried it, but from what I’ve read it’s flavored with citruses, mint and green tea plus the herbs Becherovka is known for. I bet it would be delicious in this mule recipe!

Citrus is critical to any Moscow mule. Citrus adds an important zing that gives balance to the sweetness and spiciness of the ginger beer and Becherovka.

For a fresher taste, use a fresh lime — half a lime per cocktail will do! The store-bought stuff will work fine in a pinch. (I always have it on hand for this reason.)

Ginger beer is a fermented ginger beverage. Although its name includes the word “beer,” it is actually non-alcoholic.

You may substitute ginger ale if you like, but know that your cocktail may be a bit on the sweeter side.

How to make a Czech Mule cocktail

You can pull off this Czech drink in just a few steps.

First, take your copper mule mug (affiliate link) and fill it with your ice, crushed or cubes.

Top with lime juice. If you’re using a fresh lime, you can drop in the spent shell. As a result, the zest of the lime will add some more citrus bite as the drink infuses. (That is, if you don’t drink it all right away.)

To finish, top with ginger beer. Garnish with a lime wedge, a piece of candied ginger or a red-white-and-blue paper straw, to represent the Czech flag.

Mule recipes from around the world

Because the mule is so versatile, you can make them with many different spirits to enjoy different flavors:

The Mexican Mule is always a treat because it is made with either crisp, bright tequila or smoky mezcal.

Use brandy or cognac to make a French mule.

A decidedly American mule, bourbon is the star of the Kentucky Mule.