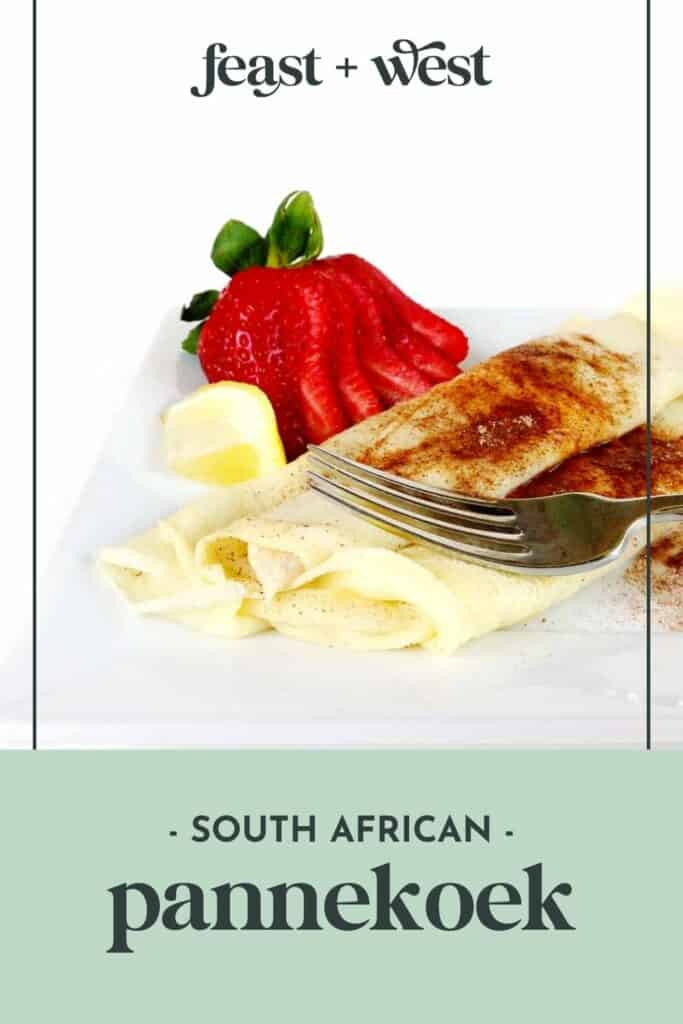 South African Pannekoek are a traditional Afrikaans breakfast treat or dessert. Enjoy these thin pancakes with a sprinkle of cinnamon sugar and a drizzle of lemon juice.

With Mother’s Day on Sunday, it seems like a fitting time to introduce to you my mom, Andrea!

She was born and raised in sunny South Africa. Before moving to the U.S., she attended a cordon bleu cooking school in Cape Town.

I owe so much of my love for the kitchen to her, so I’m inviting her to share a South African recipe and a story with us every so often.

Here’s what she has to say about pannekoek:

Growing up in South Africa, my first memories of pannekoek were at church bazaars. To raise money, the ladies of the church would stand over hot, one-burner gas stoves and flip the thin pancakes.

They’d place one pannekoek on a paper plate, cover it in cinnamon sugar, roll it up and serve it with a lemon wedge.

How to pronounce pannekoek

Pannekoek is pronounced PUN-uh-cook. It means pancake in Afrikaans, which is one of the 11 national languages in South Africa.

Afrikaans is a derivative of Dutch spoken by about 13.5% of South Africans, according to Wikipedia. It’s the third most common language, after Zulu and Xhosa. (English is fourth in the list!)

As descendants of the Dutch, Afrikaans folks are still making Dutch-derived recipes today in South Africa, and one of them is this pannekoek resep (recipe, pronounced reh-sep — with a rolled “r” sound) that I’m sharing with you today.

The Dutch have a similar recipe called pannenkoeken, so in that sense — these are also Dutch pancakes!

Whatever you call these, they are not like an American pancake. At all. In fact, it might be better! Pour yourself a cup of tea and let’s decide.

What are South African Pancakes?

Flat and thin, pannekoek are more like a slightly thicker version of Parisian crêpes than the fluffy stacks of buttermilk pancakes we eat in America.

Pannekoek batter is runny and not sweetened — one pancake generally fills up the whole pan.

It is cooked on both sides and then it can be filled with savory or sweet fillings for either entrées or desserts. (I have a few suggestions for you below!)

With their crêpe-like texture, South African pannekoek are a lot different than other pancakes you might have tried.

For example, poffertjes are Dutch mini pancakes formed by pouring a yeast-based batter into a special pan — almost like a little donut.

And then there are Dutch baby pancakes, which are made in a skillet. Sometimes those are called German pancakes, though the batter is really more similar to a Yorkshire pudding or popovers.

In other words: There are lots of ways to make pancakes out there and we must embark on a mission together to try them all. Who is with me?

How to eat pannekoek

In South Africa, we usually eat pannekoek as a treat after a meal or as a savory Sunday supper.

You can eat them with a knife and fork or you can wrap them in a cone of paper (like you’d get crêpes at a food truck) and just bite into them.

My mom adapted her pannekoek recipe into a breakfast dish for our family, sometimes serving them with blueberry compote or another fruit topping. (See the section below on toppings for some more ideas!)

Mother’s Day is coming up this weekend, and South African pancakes would be a perfect breakfast or brunch idea for your mother. (And maybe serve it to her as breakfast-in-bed?)

How to make Pannekoek

I’ve watched my mom make pannekoek enough times to have picked up on a few of her tricks for making these South African pancakes.

First, make sure to let the batter rest for 30 minutes to 1 hour before cooking the pancakes.

It is also important to “season” your skillet before adding the pannekoek batter. This will help keep the pancakes from sticking.

Make sure not to add too much batter into the pan at once. Remember, pannekoek are very thin, so you want a very thin layer of batter for each pancake.

Lastly, you’ll know the pannekoek are ready to flip when bubbles form on top and the edges start to pull away from the sides of the pan.

Pannekoek can be made gluten-free with almond flour. For tips, see this recipe for gluten-free crêpes.

But the beauty of these pancakes is that you can dress them up however you want! Try one of these toppings instead:

Any of these would make an excellent addition to South African pannekoek! You can add them on top or roll them inside as a filling.

You can even try savory fillings, like mushrooms, asparagus, spinach or bacon. (Take a hint from these spring vegetable potato crêpes.)

I hope you love them as much as we do! They’re so lekker, as South Africans say. (Pronounced LECK-uh — it means superb or fantastic.)

FOR THE CINNAMON SUGAR

Next The United Plates