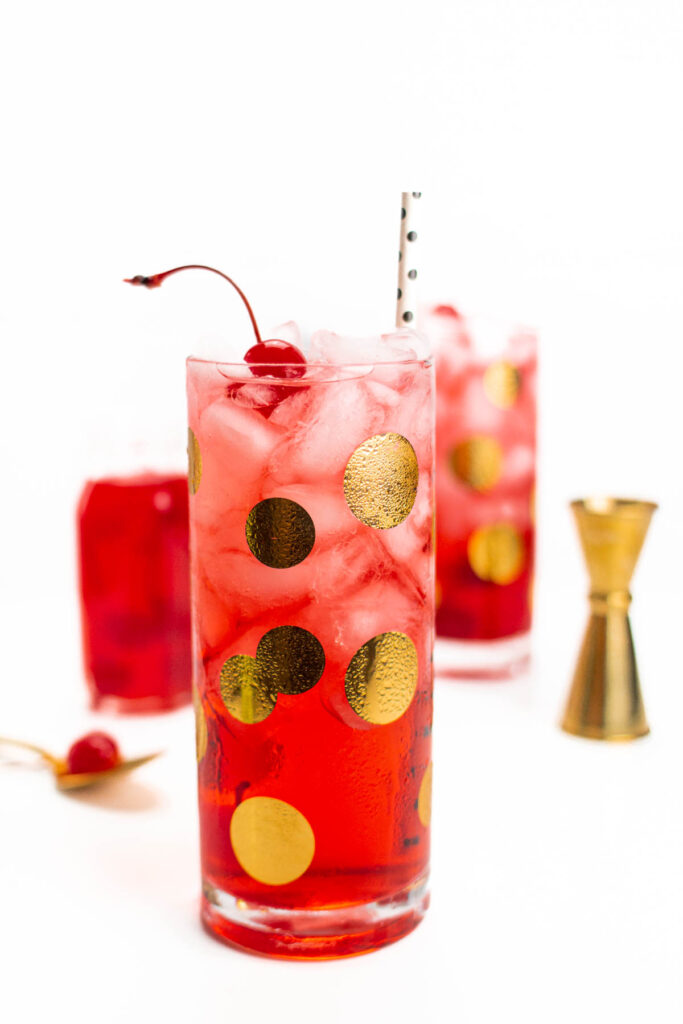 The Dirty Shirley is the cocktail of the summer. Learn how to make this quaffable twist on the classic Shirley Temple drink that is full of nostalgia (and vodka).

Each summer, there is a drink of the summer that everyone can’t stop talking about.

First there was the Aperol Spritz. Then, we were making whipped coffees. Last summer it was the espresso martini.

And this year, it’s a boozy Shirley Temple, lovingly known as the Dirty Shirley. The New York Times has called this cocktail the unofficial drink of the summer, and I don’t disagree.

Vodka, grenadine and lemon-lime soda — with a maraschino cherry on top — come together in this adult version of the nostalgic sweet drink.

What is a Shirley Temple?

The Shirley Temple drink contains grenadine and either ginger ale or 7-UP, and it’s always topped with a maraschino cherry.

It was purportedly first served to the actor on a visit to the Royal Hawaiian hotel in Honolulu in 1935. She was too young to drink alcohol, but they wanted to treat the star like other celebrities, so they dreamed up this fruity drink just for her.

However, Shirley Temple Black herself wasn’t actually a fan of the drink. She told Scott Simon in an NPR interview that people around the world served the drinks to her because it shared her name. She called them “those saccharine, icky drinks.”

Despite its namesake’s opinion, the Shirley Temple is a classic mocktail recipe that’s adored by kids and adults alike. It went out of fashion for a while, but this cherry drink is coming back, and this time it has vodka.

What is a Dirty Shirley?

The Dirty Shirley cocktail is a boozy take on the traditional Shirley Temple recipe. It typically contains a shot of vodka, though you could use rum if you prefer.

You can also make a cocktail called the Shirley Temple Black — named for the actress’ married name. This version of the cocktail contains dark rum, so it has a darker color. You could also use spiced rum.

Though the late Shirley probably wouldn’t appreciate being called “dirty,” perhaps she’d like the adult version a bit better, as the alcohol helps to cut the sweetness.

What is in a Dirty Shirley?

There are four simple ingredients in a Shirley Temple cocktail. They are as follows:

Ice is a fifth unofficial ingredient, but a very important one!

There are only four ingredients in a Dirty Shirley Temple drink, but there are a few ways to mix it up.

With the addition of alcohol to these colorful cocktails, it’s important to get this element right so it doesn’t burn or taste too boozy. It’s all about balance. The addition of vodka should help to cut the sweetness of the splash of grenadine, sweet soda and cherries.

As I always say, use the best you can afford — my go-to advice for anything with drink mixing. A cheaper vodka is more likely to burn, so choose something in the mid-range, around $10-$20.

If you already have a favorite vodka, use that! In my Vodka 101 post, I’ll tell you how to pick out a bottle of vodka. My go-to brands right now are Tito’s, Deep Eddy, Absolut and Skyy Vodka. If you like, you can use cherry vodka for extra fruity flavor.

Grenadine is a pomegranate syrup with a pretty color.

It is available at most grocery stores — look near the other cocktail mixers and ingredients like bitters and sour mix.

This pomegranate syrup is also available online. Rose’s Grenadine is a popular brand, but I love this one from Liber & Co.

You can also make your own grenadine with pomegranate juice or you can buy it.

Grenadine keeps in the fridge for about 2-3 months, so you can make all the Dirty Shirleys this summer! You can also use it to make the tequila sunrise, the pink lady and the gin daisy.

Some people make their Shirley Temples with ginger ale; others prefer lemon-lime soda like 7-Up or Sprite.

You can also use a little of both if you like! Play with your perfect ratio to find the right combination.

For something stronger, you can try it with ginger beer, which is a fermented ginger soda.

As much as I love my homemade cocktail cherries, the bright red maraschino cherry garnish with the sweet taste is essential to the classic Shirley Temple mocktail.

You don’t want to skimp on these! One is enough, but if you add three or four, I won’t tell anyone.

Find jarred maraschino cherries at the grocery store. Look near the ice cream toppings. You can also order them online.

Making fresh ice cubes or pebble ice will give your drink a cleaner, fresher taste.

How to make a Dirty Shirley

The alcoholic Shirley Temple is a super easy cocktail.

First, add some ice to a Collins glass (affiliate link) or other tall glass. Then, add your grenadine and vodka.

Top with either ginger ale or lemon-lime soda, or a little of both. Then garnish with a maraschino cherry or two and a straw. Enjoy!

There are lots of ways to mix up this easy recipe.

Use diet soda. Feel free to use diet ginger ale or diet lemon-lime soda. You could even use club soda for a lighter cocktail.

Make it non-alcoholic. The Shirley Temple is a classic mocktail. Jump over to this recipe to make a virgin Shirley Temple for the kids and non-drinkers instead.

Mix up a Dirty Shirley Black. Add an ounce of dark rum into the mix for a darker variation of this cocktail.

Make a Roy Rogers. Use cola instead of ginger ale or lemon-lime soda.

Make it a float. Make the Shirley Temple in a pint glass, and fill it ¾-full. Add a scoop of vanilla ice cream on top.

Use diet soda. Feel free to use diet ginger ale or diet lemon-lime soda. You could even use club soda for a lighter cocktail.

Make it non-alcoholic. The Shirley Temple is a classic mocktail. Jump over to this recipe to make a virgin Shirley Temple for the kids and non-drinkers instead.

Mix up a Dirty Shirley Black. Add an ounce of dark rum into the mix for a darker variation of this cocktail.

Make a Roy Rogers. Use cola instead of ginger ale or lemon-lime soda.

Make it a float. Make the Shirley Temple in a pint glass, and fill it ¾-full. Add a scoop of vanilla ice cream on top.