Home » Cocktail Resources » Whiskey 101: Everything You Need to Know 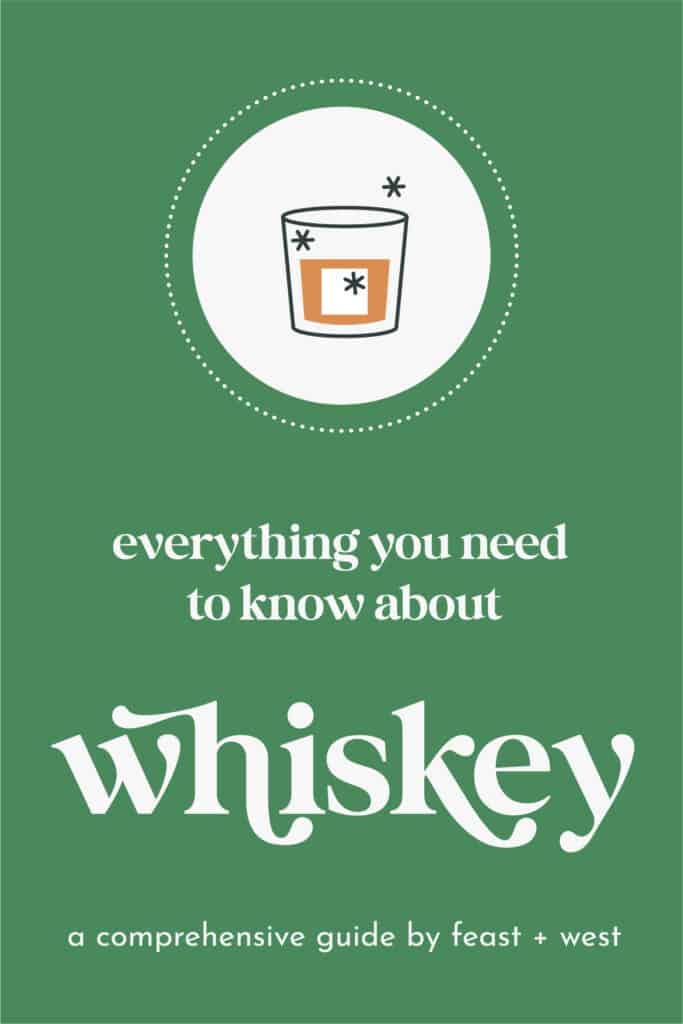 From bourbon to scotch, this crash course of Whiskey 101 tells you everything you need to know about whiskey. There are many types from around the world and so many ways to enjoy this delicious and complicated spirit.

Let’s take a deep dive into a barrel of whiskey!

This post is part of my series of Cocktail Resources. We’ve done deep dives into tequila, vodka, rum, champagne and more.

According to Brittanica, the earliest direct account of whiskey-making was found in Scottish records dating from 1494.

American whiskey consists of three subtypes: bourbon, rye and Tennessee. According to Ibis World, there are 740 whiskey and bourbon distilleries in the United States as of 2022, an increase of 15.4% from 2021.

Scotch whisky has a smoky flavor derived from its production. The grains, primarily barley, is malted and heated over a peat fire and distilled only twice. Scottish regulations state a whisky cannot be called scotch unless it is entirely produced and bottled in Scotland. Famous scotch brands are Johnnie Walker and Macallan.

Irish whiskey is made in Ireland from unmalted barley and cereal grains. It is often triple-distilled in copper pot stills and aged in new or previously new barrels. Its flavor is smoother, cleaner and less smoky than its Scotch counterpart. Common Irish whiskey brands are Jameson, Bushmills and Tullamore D.E.W.

Canadian whisky is most often made from multi-grain mash, though it contains a large percentage of corn and rye, the latter of which could survive the bitter Canadian winters. In fact, Canadian whisky is often referred to as rye whisky. Its flavor is typically lighter and smoother than other styles of whiskey. Common brands of Canadian whisky are Canadian Club and Crown Royal.

Japanese whisky is similar to Scotch and often uses malted or peated barley that’s imported from Scotland. Like scotch, it is also double-distilled. Some distillers use imported barrels while others use locally made barrels made of Japanese Mizunara oak. However, Japanese distillers prefer to refine their flavors to yield more delicate whiskies. The most popular Japanese whisky distillers are Nikka and Suntory.

Non-alcoholic whiskey isn’t technically a whiskey at all, because it doesn’t contain any alcohol. However, it deserves a mention in this list because the zero-proof alcohol scene is very much on the rise and there are some decent alternatives, and hopefully more on the way. Ritual Zero Proof’s whiskey alternative is a smokey, amber-colored liquor alternative that adds a flavor similar to whiskey to low- and no-alcohol drinks.

How whiskey is made

Whiskey production varies depending on the style, the country of origin and other factors, but for the most part, the process is very similar across the board.

According to Whisky Advocate, this is the main process that is followed to make most whiskeys:

If you ever have the opportunity to visit a distillery and take a tour, you can see how this process works. I was lucky to do so on a trip to Louisville, Kentucky, which I highly recommend!

Before or after bottling, some whiskeys are flavored with added artificial flavorings or infusions.

Peanut butter whiskey is a great example, but there are tons of others on the market including, peach, honey, maple, apple and caramel.

I like to infuse my own whiskeys at home. Try making your own Fireball AKA cinnamon whiskey or honey whiskey. These are great for mixing into cocktails.

How much is whiskey?

Whiskey prices vary widely depending on the type, popularity, rarity and country of origin. A single-barrel whiskey typically costs more, where as blended whiskeys are often cheaper. Some distillers don’t produce as much, making their bottles rare and expensive.

You can often find a bottle of whisky for as low as $15 in the United States. According to Lemons for Lulu, the most expensive whiskey in the world is Isabella’s Islay, which costs a whopping $6,200,000 per bottle.

When is World Whiskey Day?

World Whisky Day is celebrated on the third Saturday in May each year. International Whisk(e)y Day takes place March 27 each year.

Whisky can be enjoyed on its own (neat) or on ice (on the rocks). You can also cook with whiskey, making everything from icing to cranberry sauce.

There are many whiskey cocktail recipes to try. Here are some classics: