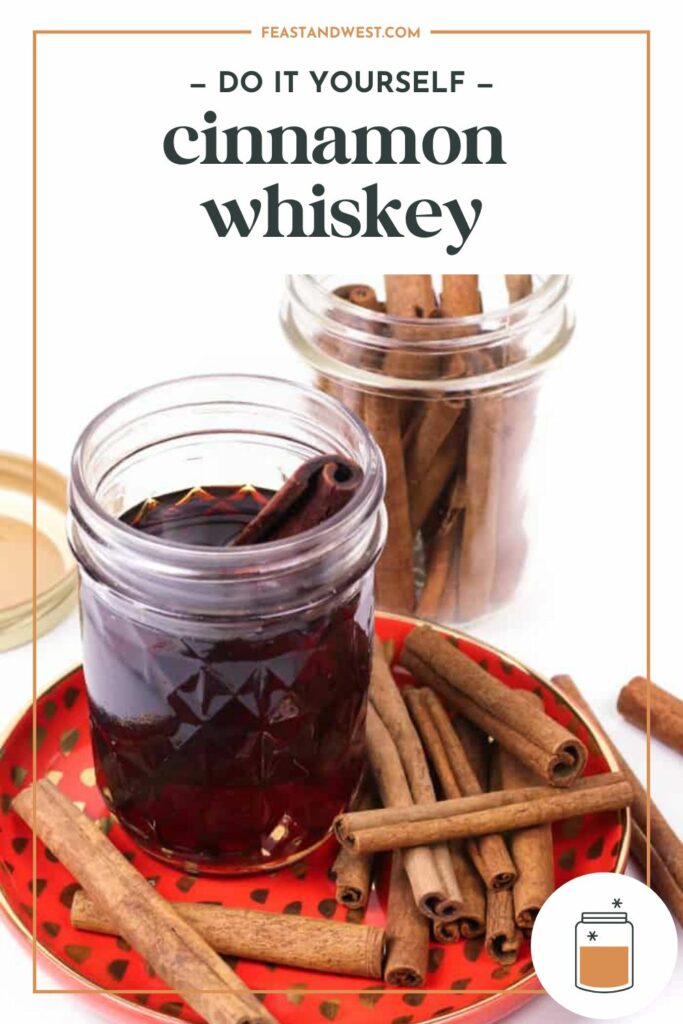 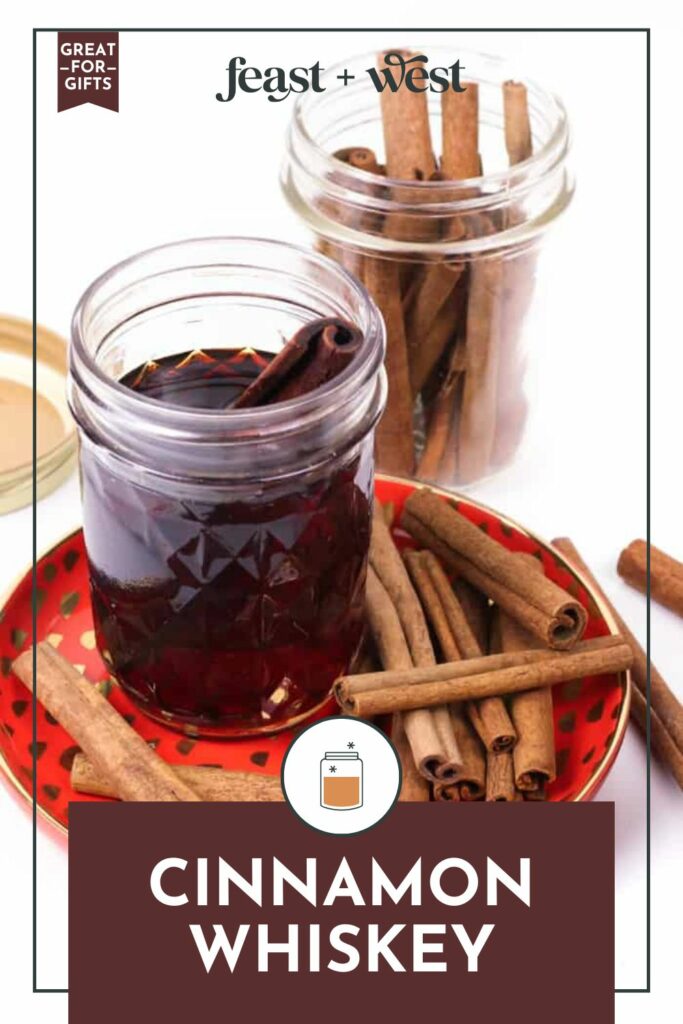 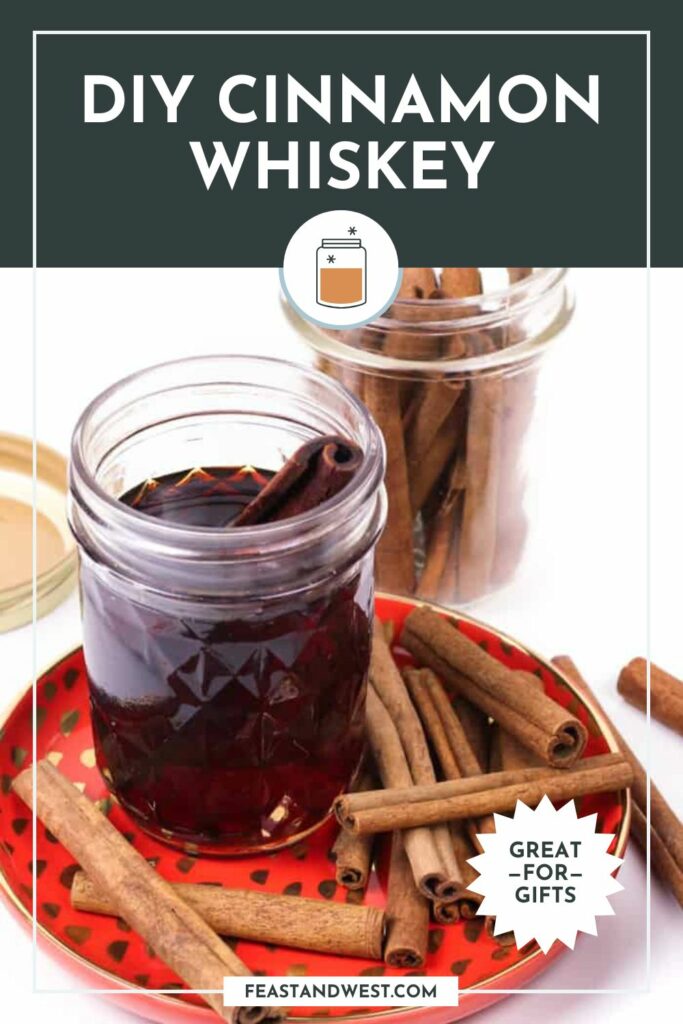 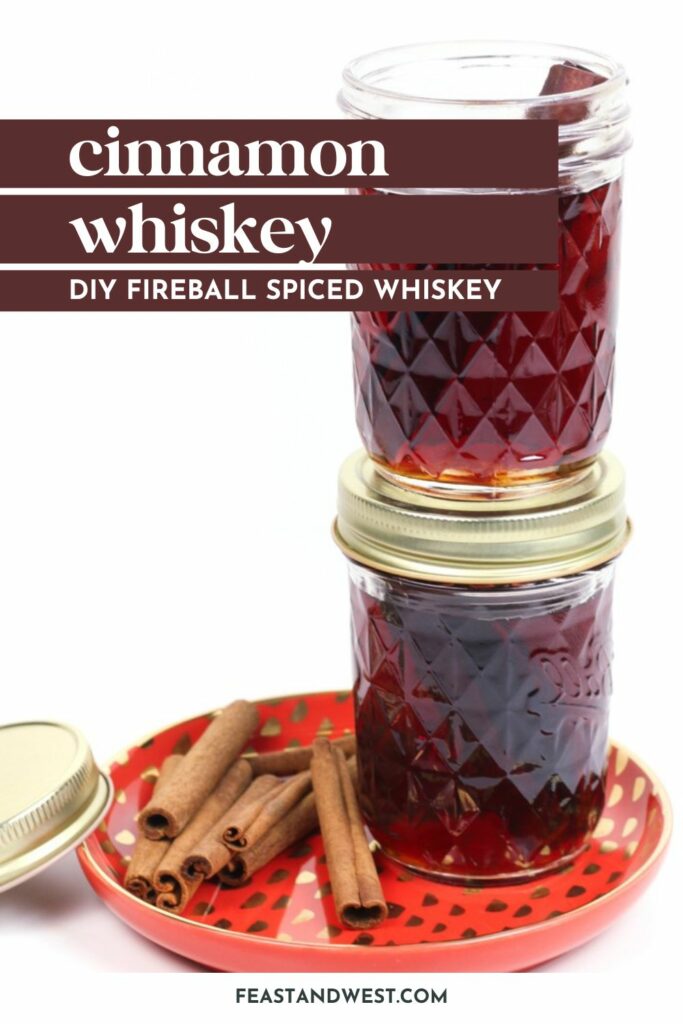 Homemade Cinnamon Whiskey fills you with the warmth of bourbon and spices. Now you can make your own homemade Fireball spiced whiskey and control the amount of spice and the ingredients.

Okay, “right now” is a stretch. This has been a years-long phase that probably will last forever.

It all started a few years ago when I was visiting Washington, D.C. and ate at a Russian restaurant with some friends.

Lining the walls on the way to our table were huge glass vats filled with various fruits.

I wondered for a moment why they had vats of fruit until I realized the vats were filled to the brim with liquid. Vodka! I realized. Infused vodka!

I’ve never been a fan of flavored liquors. They always tasted so fake to me. That is, until I tried infusions.

The ability to flavor your own spirits with whatever flavors you love, and actually CONTROL what they taste like was so novel to me.

But that was years ago, and now I’m obsessed to the point that I’ll never buy the gross stuff again. I’ve even gotten my fiancé interested in infusions.

In fact, my fiancé is the one who suggested we make our homemade cinnamon whiskey recipe again, and he made this batch all himself.

WHAT IS CINNAMON WHISKEY?

Cinnamon whiskey has been on my list to re-make for a while. I made it a number of years ago to go in my apple cider bourbon jello shots, and I’ve made it a few times since.

But this time we wanted it to be a bit more spicy like Fireball brand whiskey. The kind that brings the heat when it hits your throat!

The store-bought stuff is made with Canadian whisky, cinnamon flavoring, and sweeteners. But frankly, we can do better at home.

Since Canadian whisky is a rye whiskey, we can skip needing the sweeteners by using bourbon in our homemade Fireball.

The trick to the fiery cinnamon heat?  Using more cinnamon sticks and letting it infuse for longer.

WHAT SPICES GO INTO CINNAMON BOURBON?

You can make this infused whiskey with two simple ingredients:

We even experimented with adding whole cloves for a little extra zing. This part is totally optional, but it does add some complexity to the notes, making it really exceptional for mixing into cocktails like a spicy version of this Chai Old-Fashioned Cocktail.

Too many cloves can actually give a numbing sensation in your mouth if it is too strong, so I wouldn’t recommend using more than one or two especially if you are doing a long infusion.

HOW TO MAKE CINNAMON WHISKEY

Having the ability to control how much spice flavor you end up with is absolutely game changing.

All you need is a mason jar or some kind of vessel with a lid, some cinnamon sticks (and whole cloves if you desire) and the bourbon of your choice.

(If you want a less sweet infusion or simply aren’t a big fan of bourbon, you can use rye whiskey instead of bourbon.)

Combine all the ingredients in a jar and let it sit for a few days to a few weeks. I recommend sampling your homemade Fireball with a spoon every two or three days or so until it is at a spice level you like, then you can remove the whole spices.

(Note: The cinnamon sticks will expand and unroll as they get saturated.)

And then? It’s safe to store for a few months.

HOW TO DRINK CINNAMON WHISKEY

Not sure what to do with your infused cinnamon bourbon?

You can enjoy it as shots, gift it to a Fireball lover or mix it into cocktails like this Cinnamon Toast Crunch Cocktail.

The cinnamon flavor also pairs really well with apples, so it would be perfect to add to some Homemade Apple Cider. You could even try swapping it out for the spiced rum in this Spiced Apple Cider Rum Punch.

Whether you like your cinnamon whiskey super spicy or just a little spiced, I hope you enjoy infusing your own!

If the cinnamon whiskey becomes too strong in flavor, you can dilute it with more whiskey, preferably the same brand/type you started with.