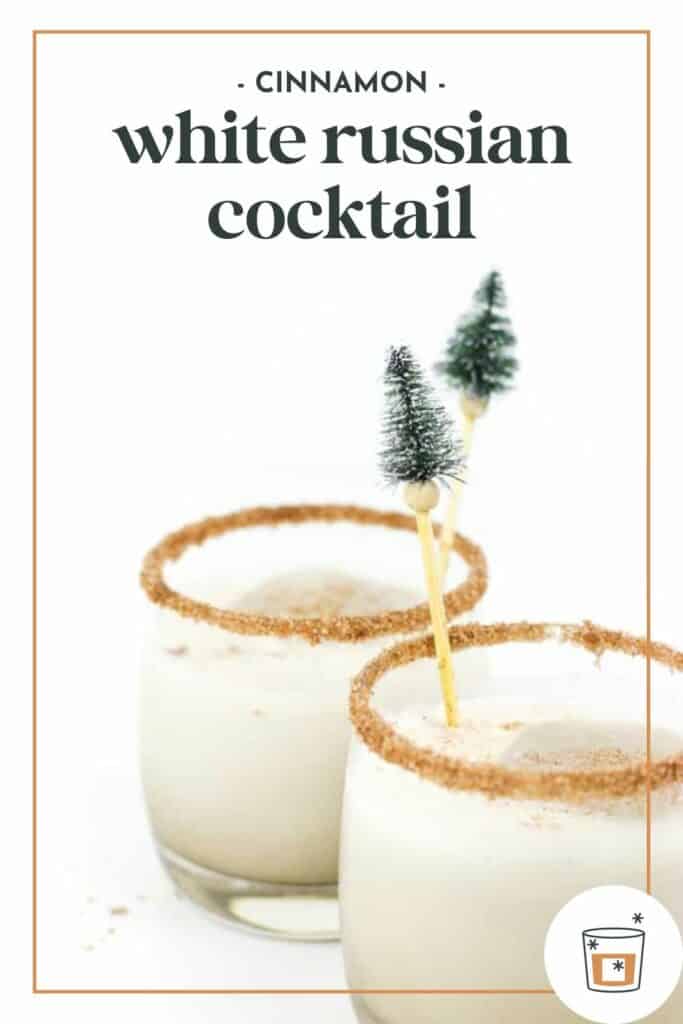 Cold, creamy and full of coffee and cinnamon flavor, the Cinnamon White Russian cocktail recipe is the holiday nightcap you need this winter. This cocktail uses a homemade cinnamon syrup that’s delicious in coffee, too!

When I think about after-dinner drinks, I always think of the classic White Russian. These creamy coffee cocktails are sweet and go down easy.

This time, I’m changing things up by adding the flavor of cinnamon to my favorite White Russian cocktail recipe.

Now, let’s get to mixing. You’ll need a cocktail shaker to mix this cocktail, and maybe some cute old-fashioned glasses!

Why you’ll love this recipe

Cinnamon lovers will adore this cocktail!

Enjoy it as a post-Thanksgiving nightcap or serve them for a Christmas party. They are so fun and festive

What’s in a White Russian?

A classic White Russian is a mixture of coffee liqueur, vodka and cream.

I usually use half-and-half instead of cream, but you may use your favorite milk. Even soy or almond milk will work! (And are perfect for those of us with dairy intolerances.)

I’ve also made a Black Russian, which is what you get when you leave out the dairy from a White Russian.

I added a hint of cinnamon flavor with homemade cinnamon syrup. It’s easy to make with sugar, water and a cinnamon stick or two.

If you wanted even more cinnamon flavor, you could use a cinnamon spirit in lieu of plain vodka, such as:

So if you like cinnamon, this Cinnamon White Russian is the cocktail for you.

It also happens to be the perfect drink to pair with all of the classic Thanksgiving and Christmas desserts. In fact, we could probably call this a Christmas White Russian, too.

How to make a Cinnamon White Russian

Making Cinnamon White Russians is super easy! Here’s what to do:

First, you’ll want to rim the glasses. Brush a small amount of the simple syrup around the outer rim of an old-fashioned glass or rocks glass (affiliate link). Roll the outer edge of the glass in the cinnamon sugar until coated.

Shake vigorously, then pour into the prepared cocktail glass. Sprinkle with another dusting of cinnamon on top, if desired, and enjoy!

What to do with leftover cinnamon syrup

If you have leftover cinnamon syrup, you can stir it into your coffee the next morning, too! This Cinnamon Bun Latte is wonderful all season long.

You could also mix it into a classic old-fashioned to give it some spiced flavor.

Or just make another Cinnamon White Russian. That is also totally acceptable.

I keep my cinnamon simple syrup in a mason jar in the fridge. And I use real cinnamon sticks, too.

This time of year, cinnamon cocktails are ideal for serving at Thanksgiving dinner or holiday parties. Or just for sipping while you watch classic Christmas movies.

In addition to this Cinnamon White Russian, two of my other favorite warm cinnamon cocktails are stovetop apple cider and mulled wine.

And of course, you can always make cinnamon-infused, homemade spiced rum and add it to just about anything you like.