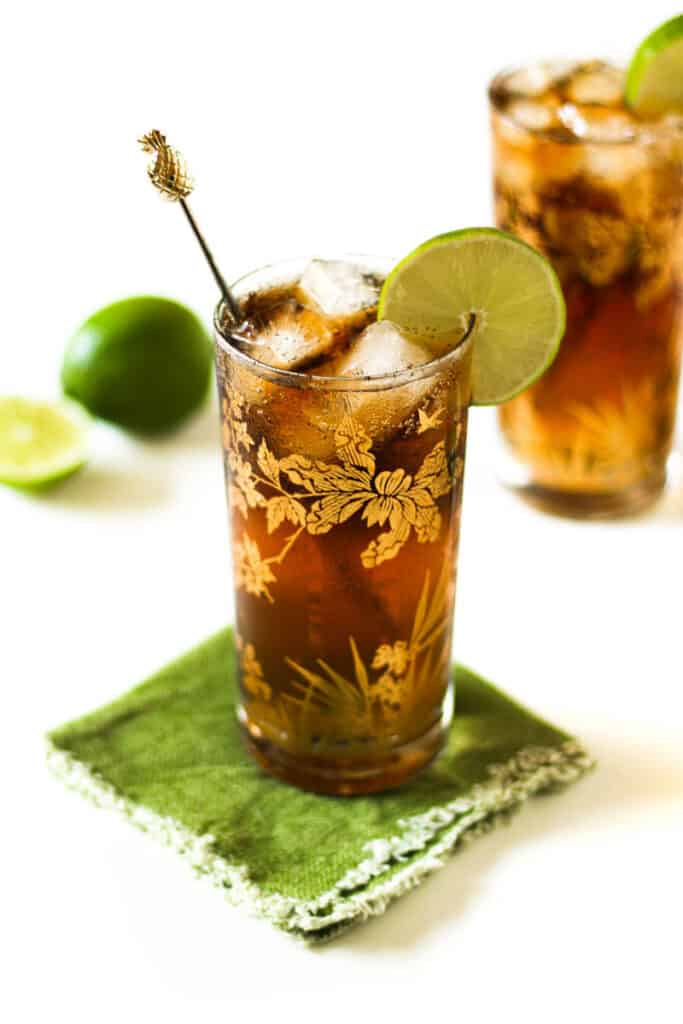 Summer isn’t over until you’ve made a Cuba Libre cocktail. This classic, 3-ingredient rum refresher is sweet, zesty and revitalizing on a hot afternoon.

Most people seem to have a “go-to” drink at a bar.

For me, it’s usually a bourbon and ginger ale, but I’ve been known to venture into vodka and cranberry juice territory.

Maybe even a tootsie roll cocktail (made with kahlua and root beer).

But other times, I really just want a rum & coke. It’s simple and refreshing.

Table of Contents hide
What is a Cuba Libre cocktail?
How to make the best Cuba Libre
Lime garnishes
Cuba Libre Cocktail

What is a Cuba Libre cocktail?

A Cuba Libre is a two-ingredient cocktail made of rum and cola that is garnished with a lime wedge. If preferred, you can squeeze the lime wedge into the cocktail for some extra citrus flavor.

In other words, it’s a Rum & Coke with lime.

Okay, so technically that makes it three ingredients — squeezing in that lime juice is my favorite way to enjoy a Cuba Libre.

The Cuba Libre purportedly gets its name from a toast, “Por Cuba Libre!” meaning, “To a Free Cuba!” given by an American Army Captain in the year 1900 stationed in Havana during the Spanish-American War.

How to make the best Cuba Libre

When you have a simple three-ingredient cocktail like this, it’s the quality of ingredients that make the biggest impact on flavor.

I have a whole post about everything you need to know about rum, but this is simple, really: Use the best ingredients you can afford, is always my advice, and rum is no exception.

Don’t settle for the cheapest bottle, but something in the $15-25 range will probably serve you well.

If you can support a local distillery, I am all for that, too.

Another option is to make your own spiced rum. This is one of my favorite alcohol infusion recipes and it’s so versatile. You can use it in anything from your rum & coke to this spiced apple cider rum punch.

Cola for a Cuba Libre

Most common, of course, are going to be our key players: Coca-Cola and Pepsi. I’m going to let you fight that one out yourself, but if you don’t have a favorite between the two, then you’d be fine with either. They will make a fine cocktail.

But we can do better than fine, can’t we? Dare I say it, but there are better options out there for the cola part of the best-ever Cuba Libre cocktail.

If you can splurge on the glass version of either Pepsi or Coca-Cola, you’re going to get a more intense cola flavor. I prefer to use Mexican Coke for that reason, plus it has a sweeter, more syrupy flavor thanks to the addition of cane sugar.

There are also other brands of cola out there! I love Boylan’s Cane Cola — such a game-changer for cocktails.

Our last option is going to be making your own cola. Yes, for real! There are a few ways to do this:

The best lime juice for a Cuba Libre

The best lime juice for any cocktail is always going to be fresh lime juice.

You can use a juicing machine (why haven’t I bought one of these yet?) or you can pick up one of these handy dandy citrus squeezers, which is what I use.

This is going to give you the freshest flavor of all, so it’s what I recommend if you have the time to take this extra step.

You can also pick up lime juice from concentrate. As much as I love to use fresh lime juice, I usually have a bottle of this in the fridge for when I don’t want to cut open a whole lime, or simply if I run out of them!

Garnishes always take a cocktail to the next level. In this Cuba Libre, we need a pretty lime wheel or wedge to seal the deal.

First things first: You need a really good paring knife to get the cleanest cuts for any citrus garnish.

Oh, and always wash and dry your produce before mixing it into a cocktail.

To make a lime wheel: These are the garnishes pictured in this post. They are great if you only need one or two garnishes because you can save the rest of the lime for later. I use these produce huggers.

Cut off the end of a lime. (Make more cuts if necessary until you see the flesh of the lime.)

Then cut a 1/4-inch or 1/2-inch slice. (Thicker will be easier to handle, but depends on the look you want and how many limes you have/need.) Then, make a small cut halfway through the circle so the wheel can rest on the edge of the glass.

Angle your knife slightly so the blade is pointed toward the center cut, and cut the quarters into eighths. Make a small cut midway through each wedge so they can rest on the edge of the glass.

And that’s how you make a really amazing Cuba Libre cocktail! Few but quality ingredients are going to make your rum and Coke with lime soar above the rest.

Let me know what you think in the comments! //susannah

Previous Cocktail Bitters 101: Everything You Need To Know